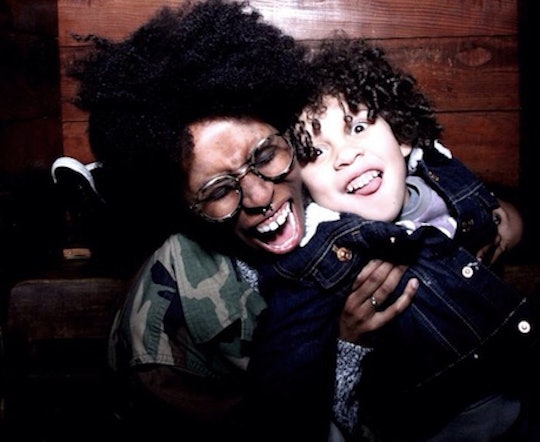 There are a few things I was always afraid of happening to my children when I first became a parent. I was afraid of SIDS, so a lot of nights I'd obsessively check both of my babies breathing to make sure they were still OK. I was afraid of my children choking on food, which they did do (and still do), so I'd panic and lose it after every single bite. I was afraid of them drowning, which my son almost did once, and then I was afraid of losing them while out in a crowded place. When I was 19, I was at the Santa Monica promenade on a Friday night with friends when a man ran past us, shouting out his son's name, crying and screaming for help. Though I wasn't a parent at the time, I thought about this man often. In fact, I still think of him and always wonder if he ever found his son.

When my daughter was born, he never walked from me or her father. She always stayed close by. She didn't always enjoy holding our hands, but she always stood close. If she wanted to walk away, she'd ask us. Even from an early age, when her language wasn't that developed yet, she always did a good job of trying to communicate her wants and needs. As a parent, it made going out into public easy. I didn't have to worry about turning around and realizing she was gone. So we went everywhere. Even when her brother was born, we'd venture to the mall often, and I didn't really think twice of what it'd be like when my son was able to walk. I just kind of assumed he'd be like his sister. He hated when I was out of his sight, hated when I wasn't holding him, so I felt as if it was impossible for me to ever lose him.

But I was dead wrong.

I was afraid that if I let go, I'd lose him. And unsurprisingly, that's exactly what happened.

From the moment my son could walk, he'd walk and then run as far and as fast as he could. Every once in awhile he'd look over his shoulder at me, and if I moved towards him, he'd try to run even further and even faster. It drove me insane. I tried to put a leash on him, a leash I had bought originally for his sister. I had no concern for the judgment people cast onto parents who put leashes on their children because I understood exactly why a parent would resort to having one on their toddler. My son couldn't be trusted to "push" his boundaries, because it meant him running into the middle of busy streets, not just once, or twice, but three times. I'f turn my head for a second to check on his sister and he would've already escaped. Going out to the mall or grocery stores became more of a headache than adventure. Beck didn't want to sit in the grocery cart and suddenly couldn't bare to be held like he used to be.

When my son was a few months shy of 3 years old, we ventured to the mall together to do some shopping. I was nervous because of my son's tendency to bolt away from me as soon as I let go of his hand. He cried and carried on in public if I was holding on to him and it made me feel like a terrible mom whenever he screamed, "I don't want to hold your hand! Stop!" But I was afraid that if I let go, I'd lose him. And unsurprisingly, that's exactly what happened.

I turned my back to reach for a piece of clothing in a store and when I turned back around I saw my daughter still standing in the same spot, but my son was gone. I assumed he was some place close by, so I shouted his name and kept walking around the store. But he never responded. My daughter pointed out that he wasn't coming, and I started to panic. I tried to tell myself that he was around here somewhere, so I took a few laps around the store. I couldn't find him at all. I questioned whether or not I should call my husband to let him know that I lost our son and decided against it, at least for the moment. I told my daughter that, as his older sister, she needed to help in watching him, then quickly apologized because she was barely 4, and really, that responsibility was mine.

I walked through the children's section again, calling out my son's name, and that's when I heard the tiniest little giggle. I recognized it immediately.

After my fifth lap around the store I finally called my husband in tears. I wept into the phone:

I've lost our son. I can't find him. I don't know what to do. Someone might have taken him. He's probably afraid and it's all my fault for being a neglectful mother.

My husband, however, softly told me to breathe that it would be OK. He calmly suggested I walk around again and I shouted into the phone that Beck was nowhere to be found. But I took another lap, mentally yelling at myself because we should've just stayed home. I told myself this was all my fault, this was all just proof that I couldn't be trusted to take care of my two children. I told myself I was a bad, terrible, horrible mom. I walked through the children's section again, calling out my son's name, and that's when I heard the tiniest little giggle. I recognized it immediately.

I turned and noticed his tiny feet poking out from under some clothes, and I threw all of those clothes on the ground and scooped up my child, who was laughing because he assumed we'd just played an ultimate game of hide-and-go seek. Behind me, my daughter said, "Don't ever scare us like that again! We were so scared!" and I put Beck back down, held his face in my hands, and told him, "I love you, I'm so happy you're safe, but don't you ever f*cking do this again. It is not OK!" When Beck realized how scared I'd been, that's when he started to cry.

There are no words to describe the moment you think you've lost your child. It is a surreal, out-of-body experience. I felt like I was watching myself in slow motion, frantically running around that store with my daughter trailing behind me. I don't remember when I started breathing again, because it seemed like my breath would never, ever return. I can't describe the fear that had overtaken my body. Even thinking about it now makes me shudder. Reliving that experience isn't my favorite. My kids talk about it all the time when they're discussing what they were like as babies. My daughter will still scold my son for what he did, and he usually nods and agrees with her. Now that my kids are 6 and 7, they're allowed to wander a bit ahead of me in spaces, and they ask if they can go to different parts of stores, museums, and groceries stores on their own, but always together. As they walk away from me, I suck in my breath, my eyes never leaving Beck.