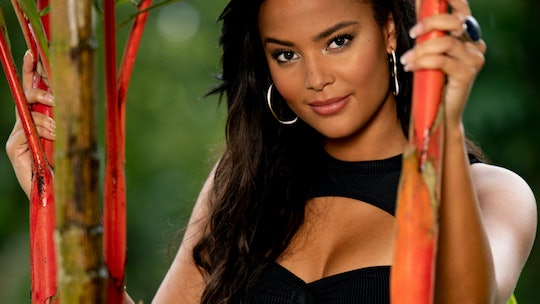 Are You Really Living If You Aren't Following 'Love Island's Kyra On Instagram?

The contestants on Love Island may be hot, but the drama on the new CBS reality series is even hotter. Early on, fans saw Kyra spark something new with Cashel, but in recent episodes, everyone watched as newcomer Eric boldly made his way into Kyra's heart. While most fans are taking sides in the blossoming love triangle, others are turning to social media to see who Kyra ends up with. However, Love Island's Kyra's Instagram doesn't exactly give away any spoilers — sort of.

You can find Kyra's Instagram account under the handle @kyra212green. Per her bio, Kyra's username is a direct reference 212 Green, a soul pop band she started with her siblings, Riley and Tori — who is currently running Kyra's account while she's filming Love Island in Fiji. For those of you who don't know, Kyra starred in Season 8 of America's Got Talent as part of 212 Green. And while the group didn't get far in the competition, they are still performing today.

The New Yorker's Instagram profile also states she is African American and Russian. Kyra's bio then tells her 151K followers she is represented by LA Model Management and a Pisces, both of which are showcased through dreamy portraits and bikini shots scattered throughout her feed.

Although Kyra — or should I say Tori — hasn't shared many photos about the CBS reality series, the account teased a new photo featuring Kyra and Cashel on Jul. 22.

The picture was captioned, "Let’s hear some thoughts. Do you guys ship Kyra and Cashel?!"

Meanwhile, on the same day, Cashel's Instagram account posted the same photo with the caption, "Our favorite couple is back on tonight 🔥"

What message is CBS trying to send with these pics? I'll let you decide.

Prior to joining the Love Island cast, Kyra opened up to People about her expectations for the show. The bisexual reality star revealed she "grew up in a family of hippies" and wanted someone who does whatever makes them happy.

"It’s always super hot to me when a guy is his true self and not just the norm and he’s confident in that," she said.

That said, Kyra also explained she will keep an open heart and mind during the Love Island process.

"I feel like at the end of the day, you have to go in and just put yourself out there. I feel like when anyone goes in there and they try to be something that they’re not, or they try to play the game, everyone can see it on the outside," she told the publication. "It’s 24/7 surveillance, so I can’t really go in there trying to fake anything or do anything that’s not me because at the end of the day, it always comes out, which is a good thing. So I’m just going to go in and be myself and not try to force anything."

Whether the Love Island star ends up with Cashel, Eric, or none of the above, Kyra's Instagram proves she is a true free spirit who has plenty going on, and hopefully, fans get to see more from her in upcoming episodes.