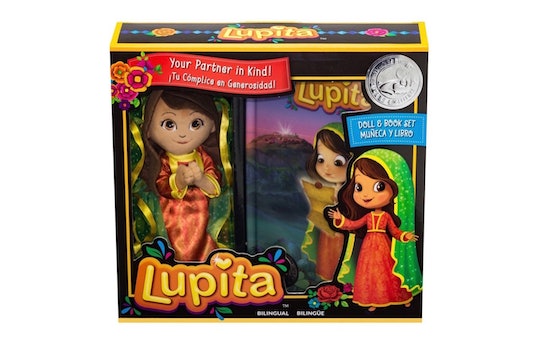 The magic of Christmas time lies in the traditions, from the festive decor that comes out once a year to the rich food that instantly makes your entire house smell like the holidays. For many households, the Elf on the Shelf has become a pivotal part of their December festivities. Now, many families are welcoming Lupita into their home: a Hispanic, bilingual alternative to the Elf on the Shelf.

It was in 2005 that Carol Aebersold and daughter Chanda Bell released the wildly popular Christmas book, The Elf on the Shelf, which came with the plush elf that is now a December staple in many family's homes. As the Elf on the Shelf website explained, "The magical Scout Elves help Santa manage his naughty and nice lists by taking note of a family’s Christmas adventures, and reporting back to Santa at the North Pole nightly." Each morning, the Elf appears in a new spot for children to find — check out the #ElfOnTheShelf social media hashtag to see just how creative some parents get!

It wasn't long before the idea took off. In 2014, Neal Hoffman created the Elf's Jewish counterpart, Mensch on a Bench. Per the official website, the Mensch on a Bench promises to "Add more Funukkah to Hanukkah!" As an article in The Cincinnati Business Courier reported, it was in 2015 that mom and former Proctor & Gamble Co. executive Leslie Guzman decided it was time to create an equivalent for Hispanic children, and thus Lupita was born. Complete with a 35-page book and a 9-inch plus doll, Lupita "encourages children to be kind and to do good deeds throughout the holiday season." She is marketed as, "Your partner in kind!" or, "¡Tu cómplice en generosidad!"

In the above interview with WLWT, Guzman reported that Lupita "is a little girl who witnessed wonders that happened in Mexico." Inspired by Mexican patron saint Our Lady of Guadalupe, Lupita receives a letter that urges her to do a good deed every single day during the holiday season, which lasts from December 12, the feast of Our Lady of Guadalupe, until January 6, the Mexican tradition of the Feast of the Three Kings. Lupita also "gives the children an opportunity to write to her and tell her of all the good things they've done for others." Each page in the storybook has text in both English and Spanish.

Though Lupita was created with Hispanic families in mind, her story and purpose spans all ethnicities, religions, and backgrounds. "We want to bring something that is relatable to all: good values, love, tolerance, that is embracing our differences, different religions, different in our ethnicity. And also, by being kind you improve the world, no matter what is our background," Guzman told WLWT. She told The Cincinnati Business Courier, "One thing I'm proud of as a Hispanic is that it's going to be in all stores, not just the Hispanic stores. That means it's being accepted by the mainstream culture, the story about being kind and making people smile through the season."

A portion of all proceeds is donated to Duchenne Muscular Dystrophy Research, according to the official Lupita website. The cause is near and dear to Guzman, whose own son Diego has been diagnosed with the progressive form of muscular dystrophy.

The Lupita Doll & Book Set was named one of Target's Top Toys of 2018, and is a Mom's Choice award-winner. The Lupita set will be released on November 4, and is sold exclusively at Target for $30. It is currently available for preorder online now.