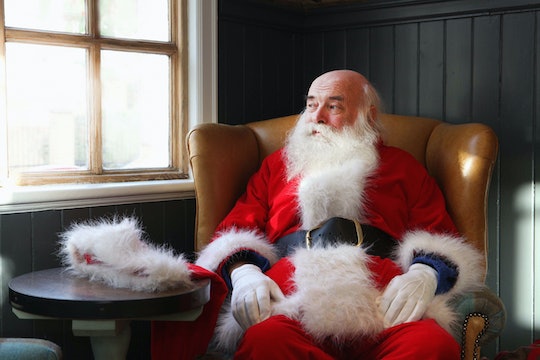 As a former Catholic/current atheist/person who loves Christmas, I have never really had to consider what people who didn't grow up with Christianity tell their kids about S-A-N-T-A. Then I came across an essay on Kveller by Mirah Curzer titled "Our Jewish Kids Shouldn't Have To Lie About Santa." In the piece, Curzer talks about the stress some Jewish children (and their parents) feel when they're pressured to keep up the Santa myth for the benefit of their peers. It is insightful, thoughtful, and has gotten some readers shook. I am not shook, though. I'm in complete agreement. You don't have to lie to my kids about Santa if you don't ~do~ Santa... that's my job.

The crux of Curzer's argument is as follows:

It is obviously important to teach our children to respect other people’s traditions. But Jewish kids are being asked to keep the Santa secret because Christmas has been constructed in such a way that everyone must participate, or it is ruined. That is, when you stop and think about it, incredibly ominous.

While the author writes that she is fully on board with Jewish parents encouraging their kids to take a sort "surprise party" approach to Santa for the benefit of their Christian friends if they choose to, this has not curbed many huffy responses to her argument. Kveller's Facebook page has garnered more than 200 comments on the article, many of them indignant. The online parenting circles where I've seen this posted — largely Christian or nominally Christian — were similarly upset. Among those who bristled at Curzer's approach, the most common refrain I saw was "I respect everyone's beliefs! Everyone should respect mine!"

Except Santa isn't really a belief, is he? Not among us adults. So using the language of religious freedom in regard to a jolly mythical elf that we all acknowledge is indeed mythical is pretty disingenuous.

We're all in for Santa in the Kenney household because #whimsy.

Let me be up-front: I am strongly on the record as being "pro-Santa." Until I was 8, I went to bed every Christmas Eve giddy in the steadfast knowledge that Santa would be leaving me a tidy clutch of gifts. As a mom, I am overjoyed to give that experience to my own children — we're all in for Santa in the Kenney household because #whimsy. Some people say this is nothing more than lying to your children, to which I say "That's exactly what it is and it's awesome. Mmm! These lies taste like delicious gingerbread. Yummy yummy yummy!"

Look, there are lies we tell to avoid the truth, like "Your goldfish? Ummm... he's just sleeping, sweetie. Goldfish float when they sleep..." and I don't like those one bit. But there are also lies of pure invention. Sweet, creative, adorable, fun lies like "Santa Claus is coming to town! Let's write a list and leave out cookies and allow this creepy goddamn elf to stare at us with his dead eyes in silent judgment all month."

I can absolutely conjure up one more to cover for another child's honesty.

But it's still a lie. A really fun but completely optional lie. Look, would I be sort of annoyed if a kid, unprompted, told my 5-year-old that Santa isn't real and Rudolph is a marketing gimmick created by a Chicago department store? A bit. But, seriously, I'm already in deep with the Santa lying, and I can absolutely conjure up one more to cover for another child's honesty. Don't worry, my children will almost certainly believe me because I've conditioned them to believe in Santa in the first place and also children are extremely gullible, which is hilarious.

It's no one's responsibility to be as enthusiastic about my cultural traditions as I am. It's not up to someone else to ensure a merry Christmas for my kids. That's my job, and I'm jolly well happy to do it.

More Like This
These Stepmother's Day Instagram Captions Are Straight From The Heart
Celebrating Your First Mother's Day? These Quotes Say It All
From Captions To Gifts, These Are All The Kindergarten Graduation Ideas You Need
Stepmom Quotes & Sayings For Every Occasion