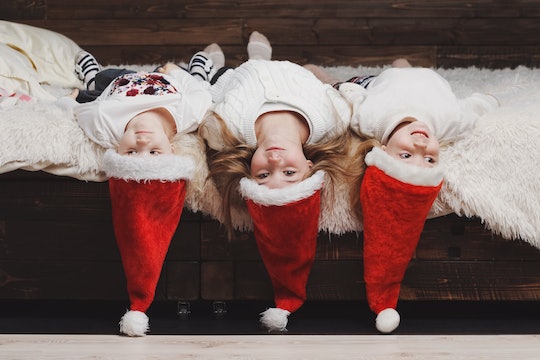 Why I’m OK With “Lying To My Kids” About Santa

It happens every Christmas, around the same time as the mall decorations and holiday jingles start showing up: parents telling me why they don't do the whole Santa thing. Like the mall decorations and holiday jingles, I don't mind these discussions. In some cases I'll even nod and say, "That's cool." The tones of these conversations range from shrugging and dismissive to irate and indignant, and one of the most common refrains is, "I don't want to lie to my kids." While I respect what anyone chooses for their family, I lie to my kids about Santa and I'm not even a little bit sorry.

Now, I'm not some sort of Orwellian villain or repressive, fretful Stepford Wife who maliciously feeds her children falsehoods to make them compliant sheep and maintain the status quo. When my children ask me questions — Where do babies come from? What does it mean when someone dies? What did that man on the radio mean when he said someone killed 58 people in Las Vegas? — I tell them the truth. At the very least, I tell them a version of the truth that best syncs up with their stage of development so that they can understand it as much as is possible and appropriate. But I think there's a tremendous difference between a lie that intentionally obscures important facts, and a lie that someone randomly came up with for fun. The former is potentially damaging and may have long-term consequences. The latter, in and of itself, I'd argue, is not.

I don't want to shield my children from the world just because it's not pretty, comfortable, or fair. But that doesn't mean I don't want to show them a world that's full of fun and beauty and kindness and, yeah, a little bit of magic. And while you can absolutely show your children all that without making up magical, gift-giving elf-men, those larger than life figures are so much fun. Moreover, they can embody an idea or spirit in a way that enables children to understand big concepts on a level they are familiar with.

And dare I say that, from time to time, fictional characters can represent something truer or as true as truth. Harry Potter isn't real (fellow wizards and witches: we have to keep saying this so that the Muggles don't suspect anything), but Harry Potter conveys a deeply relatable coming of age story that has enabled millions of readers to think, "I feel you, chosen wizard child. I feel you."

I think there's a tremendous difference between a lie that intentionally obscures important facts, and a lie that someone randomly came up with for fun.

Now I know what you're going to say: the difference between Harry Potter and Santa Claus is that no one is saying Harry Potter is real (except, perhaps, for the Snapewives and you just do not want to go down that rabbit hole). He exists exclusively in the realm of fiction. Kids know that Harry Potter is just pretend.

But... do they? Do they really? Because no matter how many times I try to explain the concept of "actors" to my kids, they only part-way get it at best. My 3-year-old absolutely doesn't understand that Elmo is just a puppet, and even my 6-year-old vaguely gets the concept that the people in Star Wars are just pretending, but he still talks about them as though Luke Skywalker and Rey exist. I suspect that part of this is because, before a certain age, a child is only really capable of thinking of themselves as a multi-dimensional character. Children only really think of themselves as real: everyone else just exists when they are around — their teacher and Santa Claus, therefore, are just as plausible as the other.

If a child has seen something, there's a good chance they believe it's real. So even if I were to say "this person isn't real," if the child has decided they are, this fact won't really penetrate before a certain age. I don't think it's a coincidence that kids begin to stop believing in Santa Claus around the same age they become less egocentric and begin to realize the "realness" of the people in their lives.

So, aside from just being naturally whimsical, that's another reason I have no qualms about lying to my kids about Santa: their grip on reality is so tenuous anyway that I don't see much of the point.

So when people go on about how awful it is to lie to your kids, I think to myself, "This really isn't a big deal lie and I wouldn't make it a big deal lie by frantically spinning yarns to plug up plot holes in the Santa myth. This is all in good fun."

Another reason is that I think there's different ways to lie. You can lie about Santa Claus being real or you can lie to reassure children that Santa Claus isn't just pretend. I think there's a difference. Do I talk about Santa to my children knowing he is a figment of the collective imagination? Sure. Do I go out of my way to make it so that my children never doubt the existence of Santa no matter how much evidence piles up to the contrary? No, and I won't.

I have not yet been questioned about the reality of Santa Claus (as I said, doing so is sort of beyond both my kids at this point), but I have a strategy for when it happens because, well, I know it will. When asked, I will respond with the response that I used at least 700 times a day when I was a museum educator:

"What do you think?"

At which point, my child will either say, "I think he's real" or, "I think he's not real." If they say he's real, then they either still believe or they still want to believe, and I say let them. There's no harm in facilitating that belief, however short-lived it inevitably is. If they say he's not real then they know the truth, and/or they're ready to know the truth, and I'll confirm it. So when people go on about how awful it is to lie to your kids, I think to myself, "This really isn't a big deal lie and I wouldn't make it a big deal lie by frantically spinning yarns to plug up plot holes in the Santa myth. This is all in good fun."

Because Santa isn't necessary, but for some of us he's a a lot of fun.

I've also heard it suggested that Santa as an omniscient judge figure is damaging, because it teaches kids to behave for the promise of a material reward rather than for the sake of human kindness. It has also been suggested that giving Santa credit for bringing toys diminishes the role of parents in this set-up. And I can see both those points, but I also don't think either is necessary for perpetuating the idea of Santa in your home. I never, for example, suggest that Santa is watching for good behavior or that a child won't get something if they're naughty — Santa just brings them presents because he's nice, not because of anything they did or didn't do. Additionally, Santa fills the stockings and brings one toy to our house: mom and dad bring the rest. I like Santa and magic and myth, but I'm also someone who requires a lot of praise and attention, and if I bought my kids gifts then, damnit, I want most of the credit.

I've also been told by some that learning the truth about Santa was a deep and scarring childhood betrayal. While I don't doubt their lived experience, I've yet to personally encounter a case in which the person who makes that claim doesn't have multiple parental betrayals. Santa himself wasn't the problem, it seems, but the Santa myth is seen, in retrospect, as part of a larger pattern of dishonesty and disappointment. Given my overall openness and honesty, I think my children will not view a casual childhood belief in Santa (and mermaids, house elves, fairies, and unicorns, too, by the way) as particularly egregious. I can't be sure, of course, but I like my odds.

I don't want to shield my children from the world just because it's not pretty, comfortable, or fair. But that doesn't mean I don't want to show them a world that's full of fun and beauty and kindness and, yeah, a little bit of magic.

At the end of the day, do I think you have to buy into Santa Claus in order to give your kids a magical holiday or childhood? Absolutely not. The world is full of enough actual goodness and beauty and wonder that you don't have to use a fictional character to convey any of it to your little ones. You can feel free to skip Santa all together. However, I do ask that you not be so quick to judge those of us who choose to embody the holiday spirit in the form of a jolly old elf as thoughtless liars who want to trick our kids simply out of a sense of tradition or moralism.

Because Santa isn't necessary, but for some of us he's a a lot of fun.