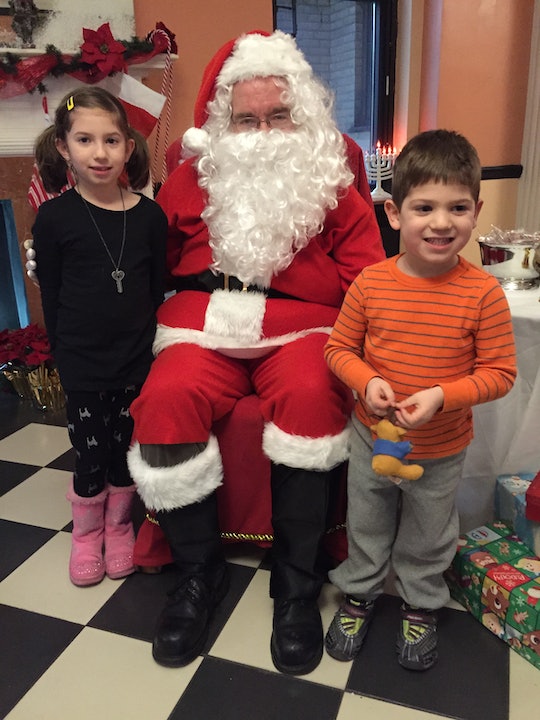 Growing up Jewish, I was always jealous of my Christmas-celebrating friends and their sparkly decor. I didn’t long to be Christian; I just wanted to surround myself with that festive bling. However, I was never enchanted by Santa Claus. To me, he was just another fictional character that joined the ranks of the Tooth Fairy and the Easter Bunny, but that’s because I wasn’t raised in a family who celebrated Christmas. Even now, though, with our half-Jewish and half-Christian children, I refuse to do the whole Santa thing. For our family, who does not practice either of our religions, the spirit of the season can’t be found in a merry old soul’s sack of toys for "good" girls and boys.

It’s hard to escape Santa Claus, though. He’s everywhere: on wrapping paper, on food packaging, at Macy’s. He is, after all, “Father Christmas.” But he isn’t someone we really talk about anymore. My children are in fourth and first grade now, and our conversations about the holidays go a little deeper than the never-ending question, "What am I getting for Christmas?” Gifts are just part of this joyous time of year, and since Santa Claus is so specifically associated with presents, we’ve taken the emphasis off him.

So, while my not being Christian is an obvious reason for not talking up jolly St. Nick, there are some other reasons why I refuse to do the whole Santa thing with my kids, even though we celebrate Christmas, including the following: