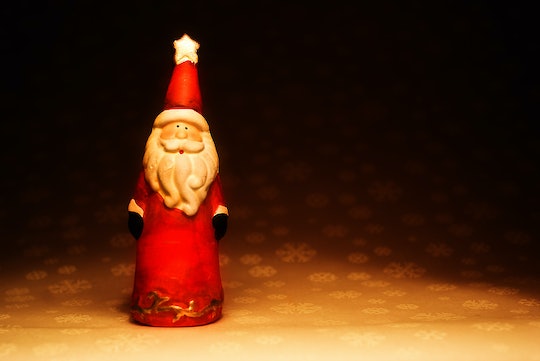 Why We Told Our Kids The Truth About Santa

The plates haven’t left the Thanksgiving table when he’s suddenly everywhere: The Man in Red. The Man with the Bag. The Jolly Old Elf, Santa Claus, Father Christmas. Santa. The ZZ-Top-bearded old man who bring elf-made presents on a reindeer sleigh to all the girls and boys on Christmas morning. He’s on TV. He’s on cards. He’s plastered on every flat surface as the incarnation of Christmas. Adults wear pins that say I believe!, and kids line up to sit on his lap and recite their Christmas lists. He’s inescapable. He's Santa. And Santa, for many, is Christmas. My kids know Santa fake.

My sons are 2, 4, and 6 years old. They’ve known the truth about Santa since they were able to comprehend it. We tell it like this: Santa is a fun game people play around Christmas time. It’s important to play along, because some kids think he’s real and we don’t want to ruin it. Plus, the game is lots of fun! Does this mean we belittle anyone who doesn't subscribe to our method of parenting? Not at all. We aren't in the business of ruining the holiday season for anyone else — least of all our friends and our kids' friends.

My Santa-loving mom pretends it’s not happening. She’s appalled that we’ve chosen to miss out on “the magic of Christmas." And she’s not alone in her disapproval. The vast majority of parents think we’re Grinches, but we’ve got our reasons. And for us, they’re good ones.

The Jolly Old Elf doesn’t bring gifts to all the boys and girls. Remember, he’s making a list and checking it twice. He’s gonna find out who’s naughty and nice. As a child, that song made my belly clench. My parents used the “Santa is watching” threat too often. They even made jokes about coal. To me, Santa was all about guilt, shame, and forced good behavior. Then I found out Santa was my parents, whose love was suddenly contingent on my continuing good behavior, particularly during the month of December. All this adds up to some serious Santa bitterness on my part.

We Celebrate The "Reason For The Season"

We’re Catholic, and we struggle hard to maintain the holiday’s religious focus as it is, what with all the busyness and commercialism and Christmas obligations. For us, Santa is one more thing that would take our kids’ limited attention spans away from Jesus. The media tells them Christmas is about presents and Santa. I’d rather not reinforce that at home.

We Want Our Kids To Know The Givers

When I was a kid, the mounds of presents under the tree were from Santa, not Mom and Dad. It always felt weird to thank the Red Man out loud, especially when we knew he didn’t exist. My husband’s family only labeled one present from Santa; the rest came from Mom and Dad.

We took it a step further. I’d rather my kids know that we picked out the presents, that we, not the magic elves, wrapped them all, and that they have us, not some mythical man in the sky, to thank. They haven’t suffered from it. In fact, they love thanking each other for gifts, and my partner and I both enjoy knowing that our boys can be thankful to a person rather than someone they can't see or touch or know.

We Believe Our Kids Should Know The Truth

We try to tell our kids the truth about everything. We answer questions truthfully, even if they’re uncomfortable. It’s important to us that we keep an open, honest, relationship with our kids. I feel that sanctioning a giant lie, however benign, runs counter to those ideals. Still, it doesn't mean that we look down on parents or caregivers who love to celebrate Christmas with Santa. More power to them. It just doesn't work for us — and our boys have never suffered from the truth.

My kids have a magic enough childhood, rich in make-believe, without adding Santa into the mix. Giving gifts and family is the real magic of Christmas, and they get plenty of that.

It Makes Skipping Over The Issue Of Multiple Santas Much, Much Easier

You know what I mean: why is Santa at the mall and at the pancake breakfast and at the Christmas photography session, all at the same time? And why do some have fake beards while some have real ones? My mom said that each Santa wasn’t really Santa, but an elf delegated by Santa to bring back news about what kids wanted for Christmas. This didn’t fly for my brood. My kids are clever. I didn't want to scramble to maintain my perilous structure of Christmas myth, and it's made outings during November and December much, much easier.

We Avoided The Inevitable Letdown

Every adult remembers when they realized, for true and for certain, that Santa wasn’t real. My belief was waning when my sister found our Christmas presents stashed in the closet, but I was still sad. And I was a little angry, too, that my parents spent so much time pushing what, in retrospect, was obviously impossible. Maybe it’s an integral part of discovering that adults aren’t all-knowing and all-powerful. If so, my kids can figure that out elsewhere.

They don’t need Santa. He’s one more thing tacked onto an already busy holiday. They don’t need The Man with the Bag to have a holly, jolly Christmas. And I don’t need to lie to make the holiday magic. Call us Scrooges. But we're all happier this way. My kids included.

More Like This
Julia Fox’s Apartment Tour Is Peak Mom Realness
Marie Kondo Gives Up Tidying Post-Kids, Sparking Joy For Moms Everywhere
Paris Hilton Is Officially A First-Time Mom
When Does A Baby Recognize Their Father? A Pediatrician Explains
What Parents Are Talking About — Delivered Straight To Your Inbox