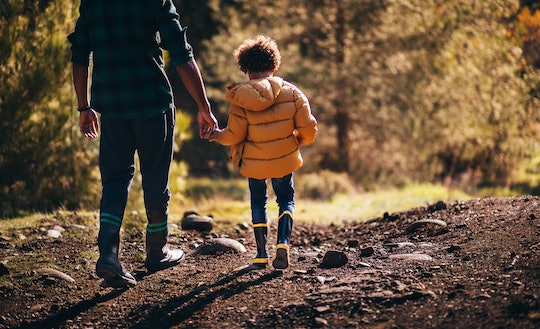 Seeing A Tick On Your Kid Doesn't Mean They Need A Lyme Disease Test, Experts Say

When it comes to a child's health, being overly cautious is the go-to for some parents. (Me, I'm "some parents." Hi!) So, it's no surprise that I find myself midnight web surfing after a day spent in the woods, wondering if I should test my kids for Lyme disease even without symptoms. Look, I said overly cautious.

Considering the amount of time we spend outdoors exploring the woods and bayous near our home where ticks often lurk — especially in the summer — it isn't actually a far-reaching question. Unfortunately, when I know my kid is at risk for illness, I tend to immediately think the worst. But, some reassuring expert advice can usually put my mind at ease.

"The subject of Lyme testing is always tricky. In general, we avoid testing children for Lyme unless we have a great clinical suspicion for infection," pediatrician Dr. Natasha Burgert, M.D., tells Romper. "Practically speaking, the diagnosis is made by a clinician in the office and confirmed with lab testing, not the other way around. There is no benefit or clinical reason to randomly test kids without symptoms."

The Centers for Disease Control and Prevention (CDC) website states that "Lyme disease is spread through the bite of a blacklegged tick (Ixodes scapularis or Ixodes pacificus) that is infected with Borrelia burgdorferi" with most U.S. cases occurring in Northeast and Mid-Atlantic states, North central states like Wisconsin and Minnesota, and on the West Coast, particularly in northern California.

The CDC also reported 4,911 confirmed cases and 1,354 probably cases of Lyme disease in children ages 14 and under in 2018. Kids ages 5 to 9 had the most confirmed cases of Lyme disease out of any age group in the United States in 2018, per the CDC. Considering this data, it makes sense that parents who live in high-risk areas might want to have their children tested just to be on the safe side. However, because of how the blood tests for Lyme disease work, experts say leaning into the clinical diagnosis based on symptoms before testing is the way to go.

Dr. Susan V. Lipton, MD, MPH, Chief of Pediatric Infectious Diseases at Sinai Hospital of Baltimore tells Romper "Lyme serology can be confusing" and that the "real symptoms and signs [of Lyme] are pretty straightforward." Lipton also cautions that "when you get a positive antibody test in someone who has symptoms that don't go with Lyme, it becomes a real conundrum."

To test for Lyme disease, clinicians often use the Enzyme-linked immunosorbent assay (ELISA) test to detect antibodies, but the test can sometimes provide false positive results and alternatively may not be positive during the earliest stages of infection, according to information published by the Mayo Clinic. A different, secondary blood test can also be done to confirm a positive ELISA test result. However, before going the testing route, most doctors will look for the hallmark symptoms of Lyme disease in children to determine if testing is necessary.

"Symptoms of Lyme disease in kids are predominantly one of three things," Burgert tells Romper. "The vast majority of kids have the classic 'bull's eye' called erythema migrans. Nearly 90% of kids present with the rash which begins at the sight of the tick bite. A significantly smaller set of children present with arthritis or facial palsy."

If you're concerned about your child contracting Lyme disease, protecting kids during outdoor activities is paramount. "The best protection against ticks is a combination approach," Burgert explains. "Treating outdoor clothing with permethrin in addition to application of DEET-containing insect repellent is your best bet."

Burgert says that because DEET-containing repellent will only act as a deterrent for a short period of time, the combination approach will keep your child protected for longer. "Wearing light-colored clothing can also help to make ticks more easily seen," she says. "Ticks already on the skin should be removed as quickly as possible."

Lipton explains that ticks "prefer to hide in creases that have been near the ground or vegetation where they live — behind the knees, the groin, even behind the scrotum in boys. If the child rolls and lies down on the ground, check behind ears, in hair, in armpits too." She says that "a tick check at the end of every day of recreation is important."

Overall, have fun and enjoy the outdoors with your kids, but definitely remain vigilant when it comes to protecting your child from exposure to ticks and Lyme disease.

More Like This
34 Instagram Captions Perfect For Preschool Graduation Photos
From Captions To Gifts, These Are All The Kindergarten Graduation Ideas You Need
26 Toddler Lunch Ideas They’ll Actually Be Excited To Eat
17 Best Potty Training Products For Toddlers