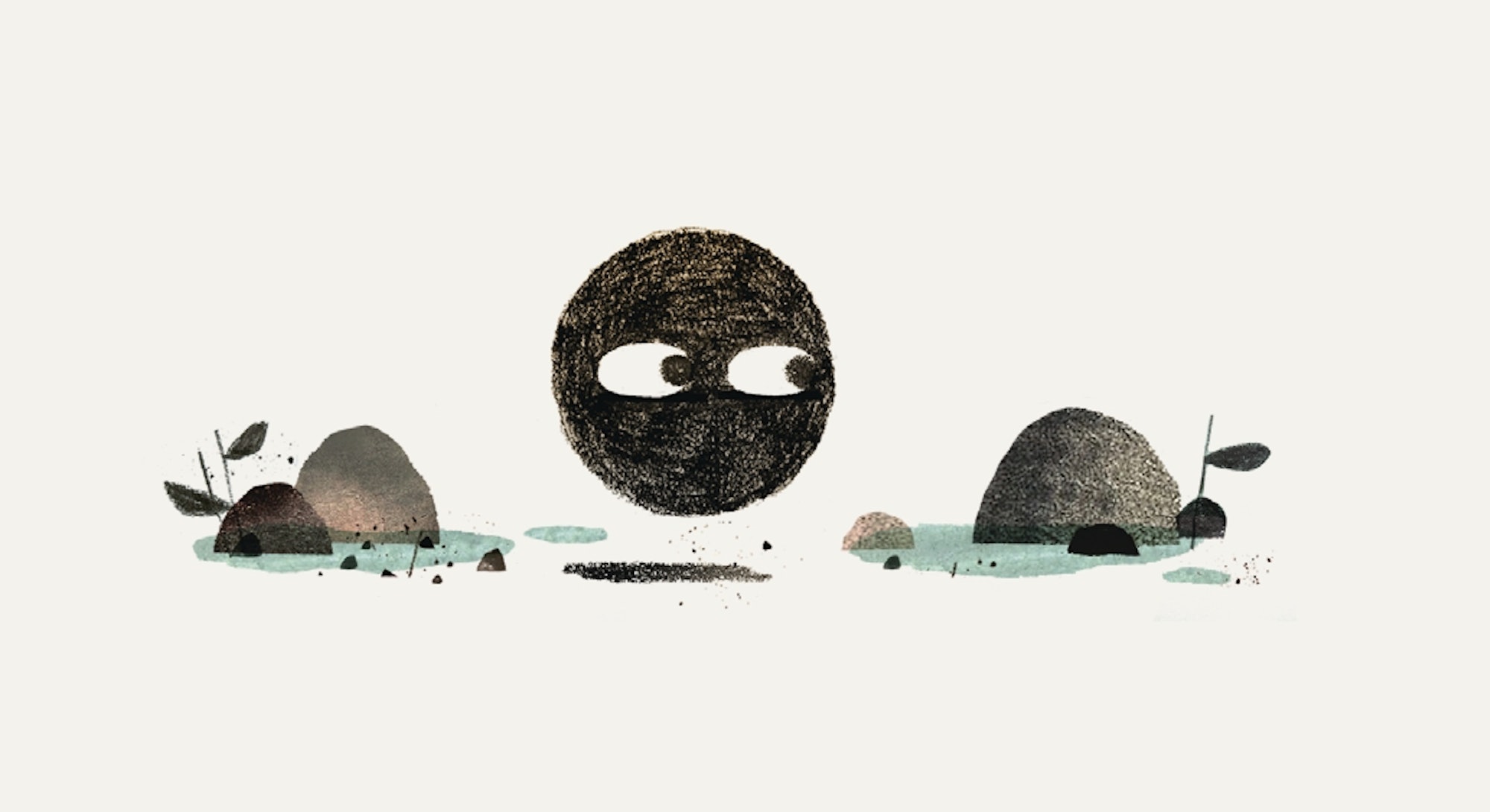 The Mystery Behind The Author Of 'Circle'

Kids don't give a flying sausage that Mac Barnett is a best-selling author. I've seen them turn out at his nighttime book events, standing on their parents' laps in their jammies holding picture books over their heads, and had the sense that this was their version of catching a Nirvana set at Re-Bar, but in all fairness, Mac says, they are there for the story, and not for the author sighting. "They're excited about the book, they don't really care about who you are," he says by phone, "I mean if you're good at reading the story, they'll be like, '... this guy is alright!'"

Roland Barthes said basically the same thing when he described writing as the moment "the author enters into his own death," and I have to admit he has a point. The joint works of Mac Barnett and Jon Klassen (Extra Yarn, Sam And Dave Dig A Hole, The Wolf, The Duck, And The Mouse, the shapes trilogy) are far and away my son's favorite books, but outside of my son announcing, in his 2-year-old voice, "By Mac and Jon," when we reach the title page, he doesn't have a clue who these guys are. I'll watch him standing at his little kid-height bookshelves, pulling picture books out and dropping them on the floor if they don't interest him, like a belligerent Blockbuster customer in front of the new releases shelf circa 1995. He doesn't care if Robert Redford directed the thing, he only cares whether he likes the story.

Japhy's newest favorite book is Circle (Candlewick Press), written by Mac Barnett and illustrated by, yes, Jon Klassen. It is the final book in the shapes trilogy, and yet another meta outing into the world of Triangle, Square, and Circle, three friends who exist in a metamorphic landscape largely without arms.

You will perhaps know already from reading Triangle and Square that Triangle is a sneaky little bugger, and that Square has a tendency to become inert when faced with adversity, while Circle, on the other hand, is the more type-A of the group, floating through life with a polish the rest of us find difficult to fathom. All of these pieces combine in the final book to offer a revelation that, rather incredibly, loops us back to the first book.

The shapes books, Mac tells Romper by phone, "started with Jon's drawings of Circle and Triangle and Square." Circle floats because Jon couldn't find a good way to give her legs. "She's curved," Mac explains, and her floating informed what she was like as a person.

We spent months talking about who Triangle, Square and Circle were, what they liked, what they felt about each other.

Mac and Jon Klassen have been buddies for a long time, having met in Los Angeles, where Klassen moved to work as an animator and Barnett went to school, and so have a radically different working relationship than your typical author-illustrator pairing — for one, they actually talk during the creative process ("Jon is one of my best friends, and we talk all the time anyway"), where most illustrators are siloed off from the author, and simply handed a manuscript to execute. This close partnership is why you get characters barging in a page ahead of the narration in their books, and why the word "but," adrift on an iceberg, can do a chapter's worth of movement.

"We spent months talking about who Triangle, Square, and Circle were, what they liked, what they felt about each other. We really did feel like we knew them," Mac says.

Hence, we know Square has a pretty regular daily routine of pushing blocks up a hill, we know Triangle is afraid of the dark, and there's a kind of psychic geography operating between Triangle's home and Square's that we understand on a couple of levels.

"I think that we always wanted to have the sense that they were living lives and those books were just capturing one day of their lives," Mac explains; he wanted to give readers the sense "that they lived near each other, and that they liked each other, but they behaved like kids actually behave."

And they do — as with my son Japhy, the second you tell Triangle not to do something, he goes and does it.

"I think it's important for me to write about kids as they are and not as adults want them to be. And that is essential to the characters of all of those shapes."

Without spoiling anything, Circle suggests the three play a game of hide and seek out by a waterfall in the wilds of Shapeworld, but instructs Triangle and Square *not* to go through the waterfall. When Circle opens her eyes, Square hasn't moved. Stone-eyed, he blabs, "Triangle went through the waterfall."

Being the responsible one, Circle goes to fetch Triangle from the cave on the far side, and there, in the dark, the two shapes see something...

In his very good 2014 TED talk, a skeleton key to his work, Mac described books as a "secret door" for the reader. The origin story of Mac, if you happen to be interested in the ~prestige of the individual~, is that he grew up in Northern California, and attended Pomona College, a private liberal arts school outside Los Angeles where he took David Foster Wallace's fiction workshop. During summers, he worked as a camp counselor, charming 4-year-olds with confabulation about spying for the Queen of England (an alternate Mac Barnett origin story that is now a grade-school book series, Mac B. Kid Spy).

After graduating, he tutored at the San Francisco non-profit 826 Valencia, a workshop space hidden behind a fake shopfront for pirate goods (the racks of dressy and everyday pirate eye patches conceal a secret door), and later opened a satellite writing center in Los Angeles. That workshop is fronted by the Echo Park Time Travel Mart, which sells things like tinned woolly mammoth chili and has a broken slushie machine with a scrawled sign that reads "Machine broken, come back yesterday."

Many, many secret doors.

It was my first hint that kids are smarter, braver readers than adults are.

Mac knew he wanted to be a children's author after coming across a Jon Scieszka ("SHESS-kuh") book, The Stinky Cheese Man And Other Fairly Stupid Tales, which was "this great piece of experimental literature for kids," he recalls. "It's a challenging text and it was my first hint that kids are smarter, braver readers than adults are." After telling everyone he met that he wanted to do what Scieszka had done, a friend, Casey, asked him if he realized that was her dad. He'd been calling her "SHESS-kuh" the whole time in the chummy way you last-name your footy mates, but didn't put two and two together because he didn't know how to spell Scieszka. Jon Scieszka looked at Mac's manuscript, encouraged him to keep on, and a year later Mac showed it Jon, who showed it to his agent, Steven Malk. Malk signed Mac, and here we are, several million books and many book awards later.

Though Mac has received a lot of renown for his picture books, he has also written grade-school novels and a hysterical easy-reader series about a monkey named Jack with illustrator Greg Pizzoli, out this fall. He is a prolific storyteller.

If you have any affinity for Sam and Dave, or Annabelle and her dog Mars, or Square and Triangle, you have probably wondered about the relationship between Mac and Jon. I myself imagine them on the far side of the waterfall when they are making a book, pitching around in the dark for something new and surprising. In my imagining, Mac is the anthropomorphic text, and Jon is the image.

"He puts on a good front," Mac says in a crescendo, "he puts on that Canadian front, but oh man, behind closed doors, the baseball cap comes off and ...!"

Jon Klassen previously described Barnett to Romper as a genius. "As soon as he understands the sound of it, he understands how to have fun with it," Klassen said, "he's a linguist in that way." The two have a great rapport together — Mac is the louder, sillier one, Jon is the quieter, dry-funny one — and they often resemble the characters they portray. They also often wear hats. Press for their book releases will often take a diversion into what they had for breakfast (chilaquiles and eggs, on one occasion). You have the sense that they spend their down time plotting and playing sneaky tricks on each other.

Kids will ask you the real questions.

Each creates space for the other, and each is adamant that children be given challenging, funny, experiential literature. If you doubt the profundity of Circle, give it a close read. "Chronologically," Mac explains, "the story takes place before Triangle. The only hint is that it is the origin of Triangle's fear of the dark."

"I like books that end with questions, whether it be with a question or implied questions," Mac says. "I don't have any moral that I am interested inscribing on a kid's brain."

It reminds me of something else Barthes said, who at the end of the day was trying to give the power back to the reader: "A text's unity lies not in its origin but in its destination."

My son does not know who Mac Barnett is, but any time he sees a square or a triangle now, he'll say "It's Square!" as though he just spotted an old friend. I think about him going through his entire life mentally adding eyes and legs onto every shape he sees — Mac and Jon truly have given him a secret door.

If Mac Barnett wrote literary fiction for adults, he would be stopped on the street, he'd be emailing back and forth with Natalie Portman (perhaps he already is), he'd be performing readings across the country in great leather armchairs, and answering rambling self-serious questions from audience members who are really just there for a selfie. Instead, he is on the road answering to the greatest critics who never cared who he is.

"Kids will ask you the real questions," Mac says, "they don't mess around, they know what's important: Do you have a dog are you competitive with other writers my grandma is really good at drawing a deer it looks better than your deer THESE ARE THE IMPORTANT QUESTIONS."

But, do you really believe him?

Circle is out March 5 from Candlewick Press.