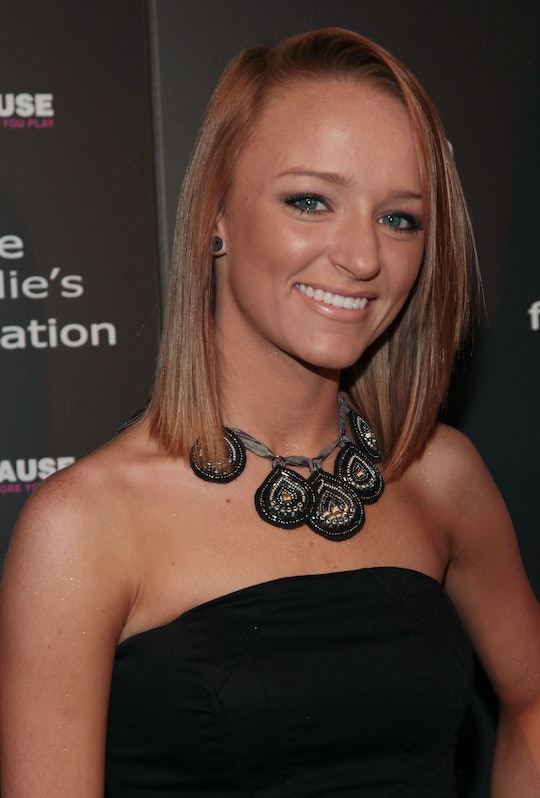 Maci Bookout McKinney has a lot on her plate these days. Not only is the Teen Mom OG star trying to do her best to raise her children very much in the public spotlight, she's also in the unenviable position of dealing with a difficult situation with her ex. Ryan Edwards, who is the father of Maci's oldest son, 10-year-old Bentley, was arrested for theft and heroin possession on Jan. 23. Now, I don't think anyone would blame Maci if she chose to wash her hands of the whole situation. But Maci Bookout's latest pic of her kids with her ex's wife make a clear and mature statement. That family is always going to come first with this mom. No matter what.

This mom of three has come a long way since she was first introduced to America as one of the original young stars of MTV's Teen Mom. She's now a 27-year-old mother of three with husband Taylor McKinney; the two share 3-year-old daughter Jayde and 2-year-old son Maverick. While Maci seems to be maturing and growing, her ex-boyfriend Ryan Edwards is clearly struggling. He has had several arrests for heroin use and is currently in jail on his most recent run-in with the law, where he is expected to stay until April, according to People. As hard as this is for Maci and Bentley, it is obviously even worse for Edwards wife, Mackenzie Standifer.

Fortunately, Maci made it clear in an Instagram post on Tuesday that she is in Mackenzie's corner, 100 percent.

Maci shared a picture of her three kids along with Mackenzie's two, 4-year-old Hudson from a previous relationship and 4-month-old Jagger, who she shares with Ryan Edwards. Then in the next pic, Maci and Mackenzie got in the picture together. Cuddling up on a blanket outside with each other's kids in a beautiful display of solidarity. Maci captioned the photos:

Family isn’t an important thing, it’s everything. ❤️💫🙏🏻 Safe to say Jayde is never going to have a boyfriend. 🙃

Maci and Mackenzie have had their problems in the past, as anyone who watches Teen Mom OG is well aware. But I have a feeling all of that is under the bridge. These moms have figured out exactly what's important... and they want to make sure everyone else knows it too.

Of course fans were loving these pictures of two strong moms focusing on their families.

you are such a strong amazing woman and I have so much respect for you and mckenzie doing this. Amazing ❤️

I can’t begin to tell you how much this warms my heart! It feels so much better to be on the same team! ❤️🙏🏻✌🏻

So awesome I’m proud of you guys!!! This is great!! Family is everything!!

Obviously, fans hope Ryan Edwards gets his business figured out, gets clean, and is able to enjoy time with his family soon. But it's nice to see that Maci and Mackenzie are able to lean on each other and bring their kids together while he's figuring it out.

Because family really is all that matters.