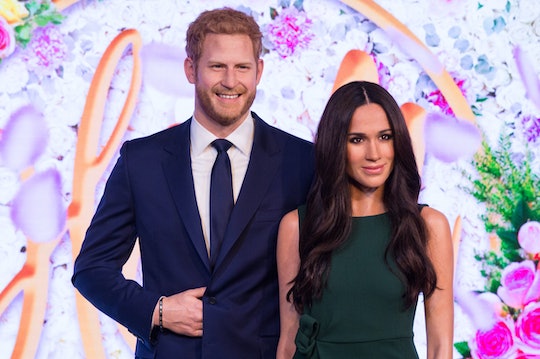 In a shocking announcement on Wednesday, the Duke and Duchess of Sussex revealed that they're planning to take a "step back" as full-time royals. In response, Meghan Markle and Prince Harry's Madame Tussauds wax figures were removed from the royal family exhibit at the London and New York museums, rather promptly. Talk about ripping off the bandaid.

The move was made on Thursday following Markle and Prince Harry's shocking announcement, according to The Independent. On Wednesday, the Duke and Duchess of Sussex announced that they'd be transitioning into a new role in the royal family and work to become financially independent, while still supporting the Queen and splitting their time between North America and the United Kingdom.

The couple's sculptures will still be on display in the museum, but just in a location separate from Queen Elizabeth II, the Duke and Duchess of Cambridge, and the Duke and Duchess of Stonewall. Steve Davies, general manager for Madame Tussauds London told The Independent that they will still be prominently featured. "As two of our most popular and well-loved figures, they will of course remain an important feature at Madame Tussauds London as we watch to see what the next chapter holds or them," he told the publication. Davies told CNN that, like the rest of the world, the museum is "reacting to the surprising news that the Duke and Duchess of Sussex will be stepping back as senior Royals."

On Twitter, the museum shared a photo of the exhibit without them, writing: "We’ve got to respect their wishes."

Romper's request for comment from Madame Tussauds on the decision was not immediately returned.

Prince Harry's wax figure was first introduced to the London museum in 2014, in honor of his 30th birthday. Markle's figure was unveiled in May 2018, just days before their royal wedding, according to CBS News, with Prince Harry's figure getting an updated beard to match his facial hair.

This isn't the first time that the couple has been moved around the museum. In August 2019, Markle's wax figure was separated from Prince Harry at the London museum and temporarily moved to a room with other A-list celebrities like herself, according to The Sun. Prince Harry's wax figure, on the other hand, stayed put in the royal family exhibit.

The couple's wax figures will surely find a new home for themselves in the museum and reflect their new normal in the "progressive new role" Markle and Prince Harry hope to create.