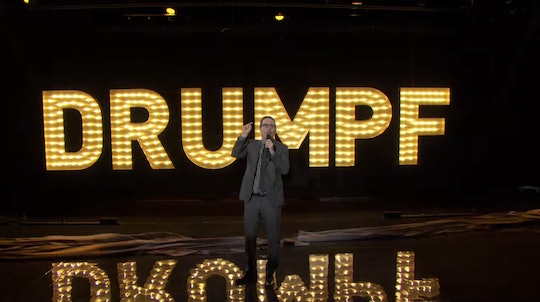 #MakeDonaldDrumpfAgain Memes Guaranteed To Anyone Laugh

On Sunday's episode of Last Week Tonight, John Oliver took on Donald Trump in a major way. In just 20 minutes, the comedic host was able to point out some major discrepancies in the Republican presidential nominee's message. The final punchline was a bit on how The Donald has been running on the reputation of the "Trump" name — the one that we all associate with big buildings and business acumen. But Trump's name, way back in his family tree, was once Drumpf — prompting Oliver to joke that the official campaign slogan should be "Make Donald Drumpf Again!" At Oliver's suggestion, Last Week Tonight fans pounced, peppering social media with an abundance of hilarious #MakeDonaldDrumpfAgain memes guaranteed to make even his most fervent supporters laugh.

Of course, the hashtag wasn't the only thing to crop up from the "Drumpf" joke; Oliver's Last Week Tonight team even went so far as to make a Google Chrome extension that would change the word "Trump" to "Drumpf" on any Internet site they visited.

It is true that Trump's grandfather, Fred, anglicized the family name to Drumpf when he came to America to take part in the Yukon gold rush, according to a 2015 New York Times profile on the candidate. (A good joke is only as solid as its references, right?) But the thing is, Oliver wasn't necessarily taking issue with the family making their name more anglicized for the American business world. His point was that Trump just rolls off of the tongue so much easier than Drumpf. Because although Drumpf is a solid German name, in English it just sounds funny. It's more of a noise one would make while sneezing than anything else. More important than that, the idea that Trump would be less appealing as a candidate or brand if his name was still Drumpf is hysterical — because it's true.

Twitter gets it. Here are some of the best takes on Donald Drumpf and uses of that Drumpfinator program:

The Drumpf Chrome extension can turn any webpage with Trump's name into a joke. If you're up for it, there are more than enough NSFW Drumpf jokes all over social media. But they might make you feel less hopeful about the way this primary process is headed than anything else if one side is just mocking surnames at this point.

Then again, you could always just do a little redecorating to make yourself feel better: