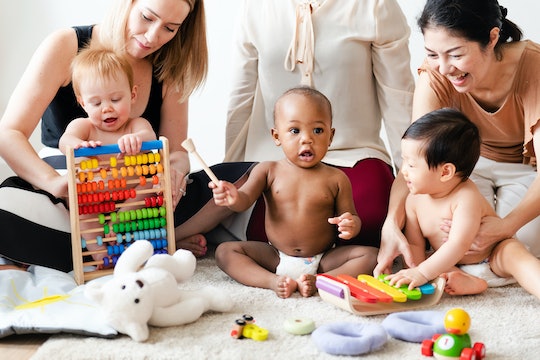 After I had my son, I found out who my real friends were. During my son’s 4-month sleep regression — which lasted four months and involved 20-minute sleeping increments day and night — I lost a couple of friends that I thought were “best” friends, because of a misunderstanding on their part about how traumatic and awful our son’s sleep problems were, and their lack of understanding about my husband’s and my postpartum depression. “Parenting is hard,” she said. Oh, OK. Is that all? Thankfully, I still have a few great friends on my side, because making mom friends is incredibly hard.

I was able to make one particularly awesome new mom friend after that debacle with those former friends, and ironically it was because both this new mom friend and I shared the fact that we had PPD from harder-than-normal sleep regressions with our children — and our children are a month apart, which meant we were in the trenches together, even if it was on Facebook messenger. This was definitely a special case and not the norm. Honestly, nothing seems harder than making friends as an adult, and when you add in the often lonely aspect of motherhood, it seems impossible.

And this is why the new NPR Podcast titled NPR’s Life Kit: How To Make Friends is gaining popularity pretty quickly. If you haven’t heard of it yet, the podcast is exactly what the title says. Julia Furlan is the host, and she breaks down how to manage your friendships as both your friend’s and your life changes, how to prioritize platonic relationships, and how to develop new friendships.

I spoke with Furlan about her new show and decided to ask her a simple, but perplexing question: why is it so hard to make friends as an adult in general, much less as a mom? “As I was reporting for this series, over and over again when I said what it was about, people were like, ‘Oh my god I need this! Making friends is so hard!’" she tells me. You guys, nobody's alone here.

But to answer my question, Furlan deferred to one of her expert contacts Heather Havrilesky, who writes the Ask Polly column at The Cut. “[Havrilesky] said that most adults just assume everyone already has all their friends so they feel isolated and lonely. And the voice we have running commentary in our minds is often really mean to us,” Furlan tells Romper.

You know that voice. It's the same one making you feel guilty for your parenting choices, too. But when you add in motherhood, that voice also tells you there's just no time. “I think in a baseline way it’s about time: parenting takes up a huge portion of everybody’s time that before kids was spent doing things like... making friends! But I also have seen a lot of mom friends wander into the weird miasma of new parenthood and emerge with some of the best new friends they’ve ever had, so I think it’s hard to generalize.”

But the key to making mom friends isn't a hard science. Furlan says it starts with making yourself vulnerable and acting like a 3-year-old. (No, not by throwing a tantrum, although sometimes that's warranted.) “I think taking a cue from all the 3-year-olds I know in my life and just saying ‘Hey, do you want to be friends?’ or ‘Let’s be friends!’ can go a really long way,” she says.

Furlan also says that a great way to make friends is to become a “regular” somewhere — whether you always go to the same event (like library story time), or you become a regular at a coffee shop, a co-working space, a hobby shop, wherever. “You'll start to see the same faces and then you'll have to see somebody a couple of times before you can kind of just strike up a conversation and start chatting, which is how it begins. Being a new parent means you’re often in these new situations — there are classes and coffee shops and even playgrounds to visit." And chances are, those areas are new situations to another mom, too. She's probably trying to figure out if you want to be her friend.

As we hear time and time again as moms, “It takes a village.” And we hear it all the time because it is so important to have a “village” when you’re a parent. “It is extremely human to want connection, to want to belong. So, of course as you are entering into one of the most challenging times in your life when you are sleep-deprived and spread thin emotionally and physically and every possible reserve is running low, it’s vital to have a support system,” Furlan says.

To nurture these friendships, Furlan says, "I think making a practice of friendship is really important — and it doesn’t have to take up a huge amount of time. But if you make a habit of sending your friend a silly emoji every evening, or a picture of the latest ridiculous mess your kid made, you’re letting them into your life. I think parenthood puts so much pressure on people, and there’s a real desire to try and be perfect. But being your whole, messy, vulnerable self as a parent is a really good way to start nurturing friendship. And of course, making it a practice to stay away from being judgmental of other parents whenever they do the same," she says.

It looks like by being vulnerable, putting myself out there in a Facebook message, and then trying to make my new friendship a priority really helped when building my own village..

As far as finding your people, become a "regular" and find common ground with other folks who are going through the trenches just like you. Just don't be afraid to put yourself out there and say, "Hey, I want to be your friend." People truly don't think you're annoying or weird, and nobody feels like they already have their friend group and there isn't room for more. We are all in the same messy boat and need our villages. And tell that little voice of yours to pipe down — you've got friends to make, and you should probably take a cue from your loud toddler and just announce it already. If you need some extra help, check out the NPR’s Life Kit: How To Make Friends on Apple Podcasts or wherever you listen to your favorite shows.