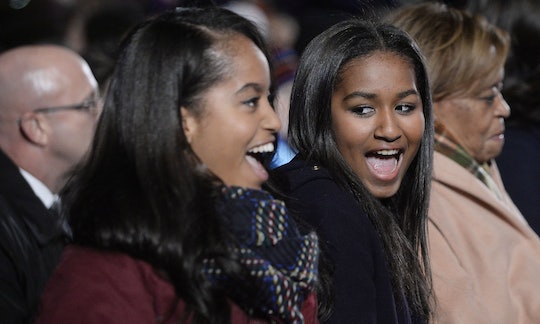 So we all get it, folks — the Trump Train "Make America Great Again" groupies are not fans of former President Barack Obama. Fair enough. No problem. He was an elected official, I'm sure he had no illusions about what his particular gig entailed. The name-calling, the lies, the constant invasion of his privacy, even after he left the White House. Again, fair enough. But here's where I sign off: Malia Obama's privacy rights. The White House gig wasn't her scene. She did her part, for eight years; The kid dealt with all of the nonsense and the gossip and the whole world thinking they had a say in how she lived her life. Now she's out. Leave her be.

Malia Obama is an 18-year-old girl living in Manhattan. Remember what you were doing when you were an 18-year-old? So yeah, you know. Actually, imagine you are an 18-year-old living in Manhattan who has been in the White House for eight years. Now imagine you're out on the town in SoHo, hanging out with friends, when some alt-right political correspondent starts bothering you. According to The Daily Beast's Amy Zimmerman, who wrote up a whole brilliant column on the matter Tuesday, the encounter ended with the "reporter" allegedly being led away by the former first daughter's security team.

(Obviously, it was the best day of the guy's life.)

This isn't the first time Malia Obama has been the center of a negative conservative media campaign aimed at proving... I'm not sure exactly what. We all remember the big to do when she was spotted at a festival in August 2016. And the other day, The Daily Mail posted a truly scintillating piece of journalistic brilliance about Malia Obama walking down the street beside another person. (Former first kids: They're just like us! They also walk places and have friends!)

Here's what's interesting about Malia Obama being a normal 18-year-old, hanging out with friends in New York, and walking beside other humans: nothing (no offense, Malia). What's really interesting is this consuming need to persecute her for basically doing anything at all — you know, like breathing.

It's particularly hypocritical when those fervent fans of President Donald Trump, who lost their collective minds when the press made comments about young Barron Trump, decide to weigh in on anything a former first kid does (you know, sort of in the same terrible way people treated the Bush twins and Chelsea Clinton back in the day). I absolutely agree: Barron is just a kid, and a first kid at that. He's rightfully off limits. When comedians were calling an 11-year-old boy names and insinuating that he was a "home school shooter," or when people wondered aloud whether he might be autistic, it wasn't OK. Obviously, seriously not OK.

But none of this justifies a counter-attack against Malia Obama — and vice versa. I thought we were supposed to be the grown-ups here.

Come on, everyone. Do better.