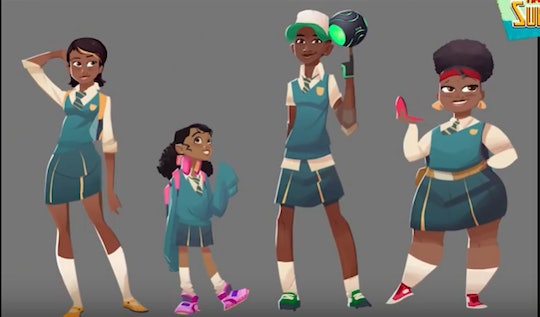 Children need to see themselves in the media they consume. This is something we have always known deep down, but it seems as though in 2019 we are finally doing something about it. Little girls need to see powerful women who look like them doing amazing things and the same goes for people of color. In other words, all of the superheroes in the world can't simply be white guys. Which is why Netflix' first animated children's series from Africa, Mama K's Team 4, marks such an important step in the right direction for kids around the world.

Streaming giant Netflix announced this week that it has acquired Mama K's Team 4, an animated children's series from South African company Triggerfish Animation Studios and CAKE, a British entertainment company, according to Variety. The series was created by Zambian writer Malenga Mulendema, a young woman who won a 2015 pan-African talent search put on by Triggerfish and Walt Disney Co., as Essence reported.

Mama K's Team 4 is an animated series following for four teenage girls who live in a futuristic version of Lusaka, Zambia as they are trained by a retired secret agent to save the world, according to Vibe. And here's what makes it even more unique — they are trying to save the world on a budget.

Mulendama told Variety that she was inspired to create Mama K's Team 4 after spending years as a child watching cartoons that never really represented her. "In creating a superhero show set in Lusaka, I hope to introduce the world to four strong African girls who save the day in their own fun and crazy way," she told Variety. "Most importantly, I want to illustrate that anyone from anywhere can be a superhero."

She also felt it was important to highlight the fact that these superheroes would be saving the world without a pile of money behind them. As she shared in a YouTube video, "They are four African girls who are recruited to a former secret agent's low-budget operation. So basically they are saving the world on a budget."

Netflix is also working with Triggerfish and CAKE to find a team of skilled female writers from pan Africa to write for the series, as reported by Animation Magazine.

Melissa Cobb, vice president of original animated series for Netflix, told the publication: "In addition to giving African writers a global platform on which to be heard, we are excited to present this powerful and entertaining new animated series that brings Malenga’s incredible and unique vision to life on Netflix. Mama K’s Team 4 has the potential to give a whole new generation of African children the opportunity to see themselves on-screen in the powerful, aspirational characters they look up to."

With the success of superhero films like Black Panther and Captain Marvel, children want to see heroes on screen that look like them. Aspirational characters that foster their dreams of being brave, being big, being the kind of person who could save the world. And that world does not just include the United States and white people. Kudos to Netflix for recognizing this.

More Like This
Exclusive: Three Siblings With Super Powers Protect National Parks In Spirit Rangers
'Workin’ Moms' Season 7 Is Reportedly In The Works! Here’s Everything We Know
Kid First Responders Rescue Puppies In Disney’s Cute New Series
Chrissy Teigen Says She’s Come To Understand She Had An Abortion To Save Her Life