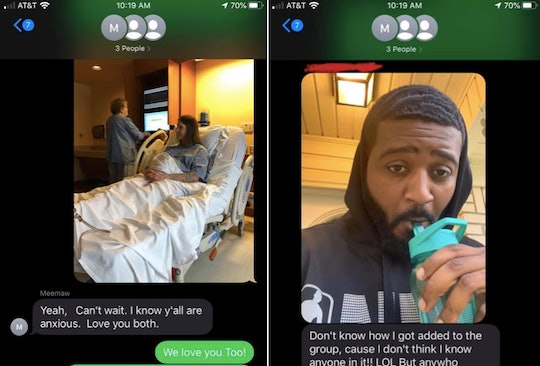 I don't know if you're part of a family group chat but let me tell you, it can be a veritable minefield. So much can go wrong, especially if you're dealing with multiple generations within your family who might not always be terribly adept at navigating the world of technology. I'm not shaming anyone; heck, I might be that person in my own family group chat. Mistakes can happen and sometimes it's terrible, but sometimes, like the time a man accidentally got added to a family's group chat excitedly waiting for their newest member to be born, that mistake can be absolutely wonderful.

Zachary Garrett was a busy guy over the weekend; he and his wife were heading to the hospital to welcome their third baby and he took over the position of keeping the rest of the family updated. It started off pretty innocuously, with Garrett letting the family know his wife was already at four centimeters dilated and hopeful the delivery would go well. He then shared a photo of his wife sitting up in bed smiling as she was preparing to give birth with his grandmother (who he calls Meemaw and this might be my favorite thing ever). His excited Meemaw responded, "Yeah, can't wait. I know y'all are anxious. Love you both. Garrett responded in return by texting, "We love you too! She was already at a 4 when they first checked her so it will probably be quick."

Here's the big surprise: It seems Meemaw wasn't the only one reading these messages.

Another man named Bobby sent a photo of himself enjoying a cold drink, writing to the group: "Don't know how I got added to this group, cause I don't think I know anyone in it!! LOL But anywho CONGRATS ZACH!! My name is Bobby by the way, shoot me your cashapp info and I will donate to the diapers."

Garrett tells Romper, he was "a little embarrassed" at first by the mishap. "When we first heard from him I was a little embarrassed that me and my grandmother were talking away with him stuck in our group chat, but his selfie brought so much humor to the situation," he says. "We all had a good laugh! Bobby could have been really rude or told us to take him out of our chat but he didn’t. He was so nice about it!"

Not only did Bobby offer his congratulations to the happy family, but he also offered them a gift for the baby. The blessed gift of diapers.

Garrett apologized to Bobby after realizing his grandmother had accidentally added him to the group chat since that was his old phone number from his military days and tried to let him off the hook, but the sweet stranger insisted. "Anytime another life comes to us is a blessing and a beautiful thing!" Bobby replied to the group chat. "Just happy to see people happy! I'm serious tho, I will donate to the diapers cuz you can't ever have enough LOL."

The excited dad relented, Bobby donated to the diaper fund, and all was well. Especially when Garrett sent him a picture of his new baby girl safely delivered.

Perhaps because everyone needs a little more good news in this world, Garrett's post went viral. His story has been shared more than 37,000 times on Facebook, and the proud dad tells Romper that the response has been overwhelmingly positive. "All of us were amazed how much everyone enjoyed the story," Garrett says. "We’ve gotten so many comments from people congratulating us on little Layla. And thanking Bobby for being such a good person! I saw a lot of people say it gave them faith in humanity."

It truly is a wonderful statement about humanity, and the two men are hoping to get together when Garrett goes home for Thanksgiving. And, hey, even if they never meet, they will always have this shared history of a beautiful moment. When two strangers were accidentally connected by a proud Meemaw. I call that serendipity.