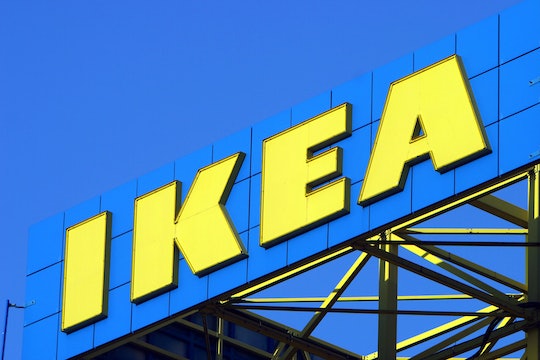 Personally, I love a good day spent at IKEA. My fella... not so much. Don't get me wrong, he loves their wares, obviously. But something happens to us there. Something dark. As I am marveling at the beautiful furniture, the rooms set up just the way I would maybe like our bedroom to be set up, maybe I start resenting him. Because our house just does not look like an IKEA showroom. He starts sweating, we fight. It gets a little ugly. Well, no more. Because this brilliant man set up "relationship-saving stations" at an IKEA store in Burbank, California, and it's basically the best thing ever.

Comedian Jeff Wysaski is a man who is clearly living a shade ahead of the curve. Despite the fact that Wysaski told The Huffington Post that he and his wife don't get into arguments at the world famous Swedish superstore, he saw a need to be fulfilled. Perhaps he had overheard the weeping in the textiles department over the impossible perfection of snow white bedding (because you just know it's never going to stay that white, right?). Or maybe he glimpsed the stiff exchanges between partners as they navigate the furniture-filled aisles knowing neither one of them are going to get what they really want. Whatever he saw, Wysaski decided to add some "relationship-saving stations" to the Burbank store on Monday, and tweeted his life-changing project to the masses.

Romper reached out to Wysaski and is awaiting his reply.

The stations were introduced at the entrance of IKEA, according to the comedian's Facebook page, Obvious Plant, with a sign that read:

Shopping can be stressful. Here are 5 quick ways to ease tension with a loved one.

Step One involved a tiny, stuffed horse and came with the instructions:

Yell at this tiny horse instead of each other. Go ahead, get it all out.

If the relationship was still feeling decidedly rocky, couples were encouraged to move onto the next stage (staring at a picture of a cute puppy), a glass jar with Elsa from Frozen on the outside with the instructions:

Write down why you're upset and give it to Elsa so she can help you LET IT GO.

If none of this helped, couples could try blowing bubbles to release their anger or wearing silly milk hats because, "No one can argue while wearing these stupid milk hats."

Of course, these pop-up stations were all set up in good fun. As Wysaski told Today:

IKEA is notorious for ruining a couple’s afternoon. This was a fun way to try and address the stereotype.

Still, fun or not, I know a few couples out there who could use some tension relief tucked away in the vast universe that is IKEA. So let's make it happen, shall we?