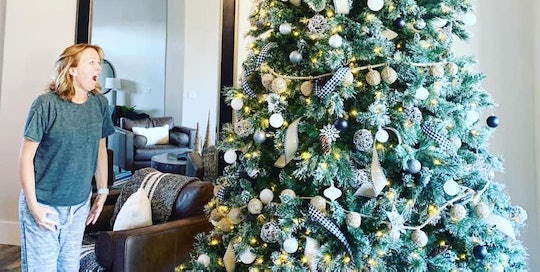 Sweet gestures come in all shapes and sizes, but sometimes they're massive and twinkly and, well, they just take your breath away. So I have a feeling you'll swoon over this viral post, courtesy of a thoughtful husband who surprised his wife with a giant Christmas tree after Halloween because she simply loves the holiday so dang much. This, my friends, this is true love.

When Troy Amdahl shared a photo of his wife, Kris, on Facebook on Nov. 1, he had no idea it would attract the attention it did. But roughly 106,000 likes and 91,000 shares later, it's clear his post has struck a chord with many.

See, every year has been the same: she wants to decorate for Christmas ASAP and he wants to wait until the end of November. This year, however, Amdahl had a change of heart and managed to pull off the best surprise ever for his wife.

"This was last night, not last year. And this was her real reaction. Actually, this was after tears, and after literally jumping up and down," Amdahl captioned a photo of his wife standing next to an enormous Christmas tree in their Phoenix, Arizona home with a look of utter shock on her face. But it's the story behind the photo that really makes it special.

"You see, she loves Christmas more than anyone over 12 I know," he continued. "She loves ALL of it, the Hallmark movies, the decorating, the gift giving, family, the meaning ... ALL of it."

Amdahl, on the other hand, felt that putting up the Christmas tree before Thanksgiving broke some unspoken social rule. "It just seemed like every time this time of the year it started that season where we debated," Amdahl tells Romper. "She would start playing Christmas music and wanting Christmas stuff up, and I'll be like, 'Nah,' because there's some Christmas police that will arrest us if we put stuff out before Thanksgiving."

The Amdahls were actually out of state with their kids when he arranged for some people come into their home and put up not one, but two Christmas trees. Amdahl says one "plain, kind of a green tree and some basic decorations" was put up in their main room because they "have all of these family memories, which [Kris] likes to hang up on the tree."

Little did Kris know, though, that there was a second, much larger and over-the-top tree waiting for her in another room.

"So she walked in and saw that first tree, and just was so excited. Like, 'Oh my gosh, we've got a tree up. It's so perfect' The kids were in on it too, and then we said, 'Why don't you walk to the other room?' And she walked to the other room, and that's when she flipped out when she saw the big tree."

Thankfully, their son, Bennett, was there to snap the photo that is now going viral. "It just struck a nerve with people in a good way," Amdahl says. "There's just all these people that love Christmas, and all those people that are holding them back. So it was fun to watch."

In case you still think Nov. 1, or any time before Thanksgiving, is too early for a Christmas tree, I'd like to point out something on which experts agree: People who put up Christmas decorations early are happier. Or you could just take Amdahl's solid advice. "As I've gotten older," he tells Romper, "I've just realized what's the point? If it makes her this happy, let's just do it. She was just thrilled."