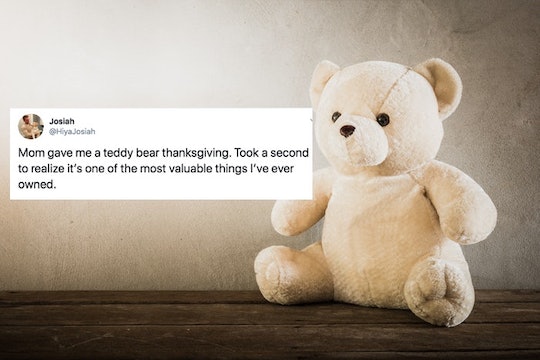 Some people are lucky enough to grow up with a grandparent who isn't just your relative, but someone who's also your pal. Your partner-in-crime. Your ally in all things. Which is why this tweet from a man whose mom made him a teddy bear made from his grandpa's old shirts is a striking a chord with so many.

Last week, Twitter user @HiyaJosiah shared photos of a gift his mother had given him for Thanksgiving: a teddy bear. Now this might seem like a bit of an unusual gift to give a grown man, but this was no average teddy bear. As he shared on Twitter, his mom had taken some of his grandfather's old shirts and sewn them together to make a very special bear for him. And he couldn't be more grateful for such a precious gift if he tried.

"Mom gave me a teddy bear [for] thanksgiving," he wrote on Twitter. "Took a second to realize it‘s one of the most valuable things I’ve ever owned." The photo he shared shows the homemade teddy bear along with several photos of himself as a child alongside his grandfather wearing the shirts, cooking food together at a barbecue, and eating what look to be giant turkey legs.

This teddy bear is a lovely memento for this man to keep with him for the rest of his life, and it has other people on the internet sharing similar tangible ways they've held onto their own memories of lost loved ones. One woman shared a photo of two pillows her mother had made for her and wrote, "I love this. After my mom died last year, I asked my cousin to make pillows using shirts from my mom, t-shirts from my brother and ties from my dad." Others shared tales of blankets made of their grandparents' clothing, teddy bears made out of their father's robes, and even a special box made in memory of a beloved pet.

The original poster shared his thanks for all of the heartwarming messages. "I’m absolutely loving seeing people share their own stories. It’s beautiful. Absolutely beautiful. To see us all connected on something that touches us in such a personal, positive way. Thank you for sharing this," he wrote on Twitter.

Of course, people will always remember their loved ones even without these types of keepsakes. But isn't it truly special to hold something simple from your grandpa in your arms? A teddy bear from your mother, made from his shirts... the kind of thing that sparks memories of days spent together in the sun. What a special idea.