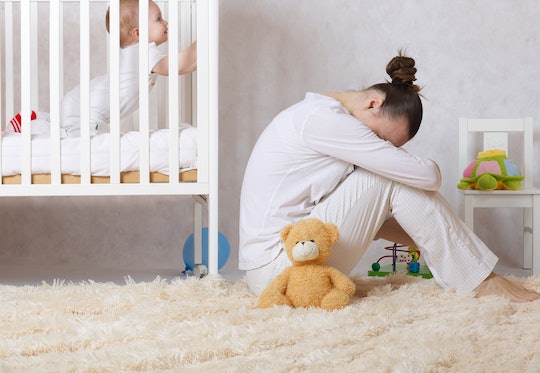 Babies bring mothers joy. Complete, total, unabashed joy. This is what most of us were told. It's what most of us expected. It's probably what most of us desperately wanted. But it's not the way it turns out for everyone, so maybe we could go on ahead and stop pretending that it does. Telling people how they should expect to feel after having a baby is false advertising, and it lends itself to a shroud of secrecy (often brought on by debilitating shame that we're not doing it right). The fact is, many new moms suffering from postpartum depression don't tell anyone about their symptoms, and the judgment, unintentional though it very well could be, in no way helps.

According to statistics shared by the Centers for Disease Control and Prevention, 11 to 20 percent of women (or an average of 15 percent of four million live births annually) suffer from postpartum depression symptoms. That's 600,000 women per year — and those are just the ones who were willing to report their symptoms. A new survey conducted by the North Carolina State University found that one in five women who suffer from symptoms of postpartum mood disorders don't report these symptoms to their doctor. And the primary reason for the secrecy?

Fear of being stigmatized.

Clinical Psychologist and PhD student Betty-Shannon Prevatt, one of the authors of the study, told local radio station WUNC that the women who admitted they hadn't shared their symptoms with their health care provider had a certain commonality:

They are afraid of being judged. They feel like because their experience doesn't match that Johnson and Johnson's commercial, that they're failing as a mother or maybe aren't meant to be a mother.

The online survey, which was completed by 211 women, found that a full 51 percent of respondents had experienced postpartum mood disorder symptoms, but 20 percent had never reported them. Some cited barriers like a lack of social support, unemployment, or a history of mental illness as reasons they found it "extremely difficult" or "impossible" to report. But fear of judgment remained the number one obstacle to seeking out help.

For the record, postpartum mood disorder symptoms include, according to the CDC:

The secret to helping these women? According to the authors of the study, which was published in the Maternal and Child Health Journal, is not keeping it a secret at all. Prevatt told The Daily Mail:

We need to make it okay for women to talk about their mental health, so that they can have better access to care. Working with the people around new mothers may be key.

The reality is, giving birth to a person is hard. And it's different for literally every person everywhere. The only unifying characteristic? It's life-altering. So give yourself a break, seek out some help if you're experiencing any symptoms of postpartum mood disorder — and know that you are in very good company, free of judgement.