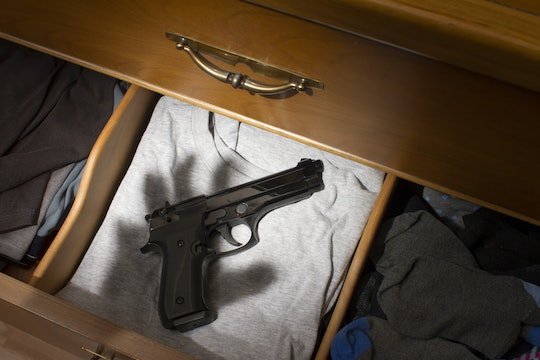 Many Parents Don't Lock Up Their Guns, Even If Their Kids Might Harm Themselves, Study Finds

The subject of guns is a notoriously touchy one in the United States, and sadly even more so in recent months. Ever since the most recent deadly school shooting at Marjory Stoneman Douglas High School in Parkland, Florida, parents all over the country can't seem to stop thinking about guns and their kids. Parents on both sides are undoubtedly concerned with their children's safety and protection. And yet. A recent study found that many parents' guns aren't safely stored... even if their kids might be at risk of harming themselves.

In this month's issue of Pediatrics, researchers released the results of a comprehensive 2015 study which looked at firearm storage practices in homes with children. The study surveyed 3,949 adults in the United States. It was especially focused on households where the caregiver or parent reported living with a child with a history of self-harm factors, such as attention deficit disorder, depression, or other mental health issues beyond depression.

The results of the study were cause for concern; 43 percent of households where children who presented self-harm indications lived said they owned at least one gun. In fact, the study found that parents tended to own guns more often than adults without children; 43 percent compared to 35 percent, respectively.

Despite the fact that the American Academy of Pediatrics recommends firearms should be stored locked and unloaded for the protection of children, the results of this study found that very few parents were taking this into consideration. Fewer than 35 percent of parents who said they had children with self-harm risk factors stored their firearms locked and unloaded. Households with children who did not present self-harm indicators only stored their firearms safely 31 percent of the time.

The authors of the study published in Pediatrics came to this conclusion:

A child’s history of depression, mental health conditions other than depression, or attention-deficit/hyperactivity disorder does not appear to appreciably influence caretaker decisions about whether to (1) have firearms in the home, or (2) store all household firearms in accordance with American Academy of Pediatrics recommendations (ie, locked and unloaded).

Since 1992, the AAP has openly held the belief that "the safest home for a child is one without firearms." To discover that nearly half of households where kids are struggling with self-harm risk factors not only own firearms but don't store them properly is a serious issue. Especially considering some sobering statistics shared by the AAP:

Households where kids could be at risk for self-harm should be even more cautious about having guns in the home; as of 2009, suicide was the third leading cause of death for adolescents between the ages of 15 and 19. The Centers for Disease Control and Prevention released statistics in 2017 that found 1,300 children were killed from guns that year; and 38 percent of those deaths were suicides.

In the wake of the tragedy in Parkland, Florida, where a lone gunman entered Marjory Stoneman Douglas High School and opened fire on students and faculty, killing 17 people within three minutes, firearm safety is more relevant than ever. For adults, of course, but for at-risk teens who might be struggling with mental health issues especially. Kids who might be confused, or frightened, or simply lost. The last thing they need is easy access to a weapon that could easily be locked up and unloaded.

More Like This
New 'CoComelon' & 'Blippi' Halloween Episodes Are Coming — & We Have Sneak Peeks!
20 Scary (But Not Too Scary) Movies For Kids
The Hocus Pocus 2 Soundtrack Is A Spooky Mix Of Old & New
How To Help Families Impacted By Hurricane Ian