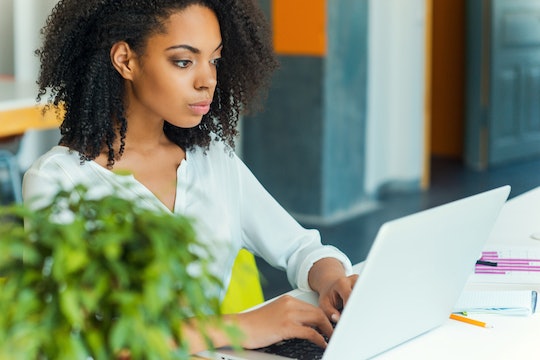 How far would you go in order to have children? It's a question more and more women are having to ask themselves in recent years as our lives change. Women are waiting longer to have children, working on their careers and their relationships in order to make sure they're ready to have kids. This makes perfect sense, of course, but this also can create issues with fertility, and it's unfortunately where many women run into trouble. In fact, many women would switch jobs for fertility benefits at work, according to a new report, because so few companies take the changing face of fertility and family planning into consideration in their benefits packages.

Future Family, a subscription-fertility service whose main mission is to make fertility accessible for everyone, just released the results of a survey they conducted from August of this year. The company wanted to get a read on the state of working women's fertility needs, especially now that so many more families need help in this area.

More than 1,700 women were asked about the nature of their fertility benefits in the workplace, and honestly the results were distressing. Despite the fact that IVF treatments can cost around $20,000 per round, according to The New York Times, a 2017 report from insurance benefits consultant Mercer found that only 26 percent of companies with more than 500 employees in the United States cover the procedure, according to Future Family.

About 12 or 13 out of every 100 couples in the United States trying to conceive will need to seek out some form of fertility treatment in order to get pregnant, according to the Department of Health and Human Services. And these treatments, whether it's egg freezing or IVF, will only be covered for a select few in the country, which means that those who can afford to pay out of their own pockets for fertility treatments will have a better chance than those who don't have fertility benefits and simply can't afford the exorbitant cost. Meaning that, if more companies don't consider covering the cost of fertility treatments, having children could well become a luxury for the select few in the United States.

While the median age in the study was between 30 to 44 years old, it's likely that millennials, in particular, are waiting longer to have children. "Millennials are making choices in the U.S because of the realities they’re facing, like the barrier of massive student debt," Jyotsana Saha, Future Family Head of Growth, tells Romper. "Women are going to be seeking fertility services in greater amounts as time goes on, and not just IVF treatments. The number of women who are freezing their eggs continues to increase every year."

Women in the survey were willing to do more than switch jobs in order to have better fertility benefits; quite a number of respondents were open to the idea of switching countries as well. Especially women in the lowest income bracket who earned less than $20,000 per year; a full 37 percent said they would leave the country for either a place in Europe or Canada in order to improve their chances of having a baby.

Saha explained to Romper that the data mined from this study provides proof that people are willing to go to greater lengths than some might have expected to have children, whether that would mean switching jobs or even leaving the country. And employers might do well to pay attention to this increasing need for fertility benefits if they hope to hold on to valuable employees.

"Employers must start doing a lot more to attract and retain talent," Saha tells Romper. "They need to offer benefits that meet the needs of men and women when it comes to fertility care, and not simply financial. People want access to cover costs, but they also need to understand what their reproductive health means at this time."

Future Family is focused on supporting their clients from end-to-end in their fertility journey, providing concierge services with experienced fertility nurses and affordable all-inclusive monthly subscription fertility plans to cover everything from egg freezing to IVF treatments in a way that is more accessible to hopeful parents living on a budget.

Perhaps employers might want to start acknowledging that fertility benefits are hugely important to their staff, and make the required changes. Because no one wants to live in a world where children are a luxury enjoyed by only a small percent of the population.