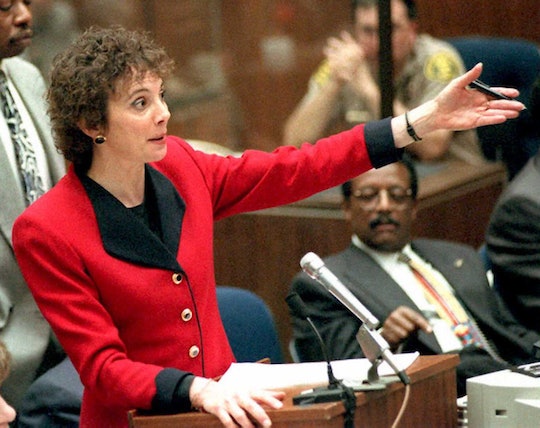 Marcia Clark's Haircut Made People Lose It At The OJ Simpson Trial, & The Sexism Was Real

When people think of Marcia Clark, they tend to think not of a prosecutor who won 19 out of the 21 murder trials that she tried during her career, but of that hair. We've all had some hairdos that were less than flattering (I, myself also thought a perm was a good idea in the early '90s), but few people are subject to a bad hair day that lasts for more than 20 years. Let's explore the tale of Marcia's Clark's famous haircut, since we're all about to relive it through The People v. O.J. Simpson: American Crime Story.

When Clark caught the case of O.J. Simpson's murder trial in 1995, surely she realized at some point that she was going to be the subject of media attention. But perhaps she was unprepared for the type of attention that she would receive. Clark, you see, had the misfortune of being born female, and so people were less interested in her almost flawless track record than they were in her hair, her clothes, and her personal relationships. She was no longer just a lawyer, she was a celebrity. But Clark never intended to be a celebrity; she was just a busy working mother with two young kids. As a mom who works from home, I rely on dry shampoo and ponytails when I neglect my hair. Clark, on the other hand, needed to look put together in the courtroom, and so she opted for a "wash and wear" perm, as she described it in an interview with New York Magazine. (Of course, it doesn't appear that magazines spoke to the male attorneys about their hair.)

Clark's hair was mocked relentlessly by the press, and by the nation at large. OK, so it wasn't a good look. It was the '90s! Nobody had a good look in the '90s. Clark was juggling two young children, a bitter divorce, and, oh yeah, trying a celebrity for a double murder. (O.J. Simpson was later acquitted in the murder trial.) She didn't have time to fuss with mousse and a curling iron every morning. But eventually, the perm grew out, so she went back to her stylist, who had always hated how she looked in curls, and he gave her a straight, shaggy bob.

On April 11, 1995, the day that Clark showed up in court with her new hairstyle, the world collectively lost it, and I write that with absolutely no hyperbole. Applause broke out. Literally, strangers were applauding a woman for changing her hairstyle to something they felt was more appropriate. The Los Angeles Times covered the story at the time without a hint of irony, and when they spoke to Clark's stylist, Allen Edwards, he told them that, by that afternoon, they were one of over thirty media outlets looking to get the scoop on the new cut.

The Simpson trial took a hard toll on everyone involved, and, when it was over, Clark quit her job as a prosecutor, eventually becoming an author and news correspondent (oddly enough, the exact same career path that former detective Mark Fuhrman took after the trial). She now wears her hair blonde, and has learned to never, ever get a perm again. She even reportedly apologized to actress Sarah Paulson for her hair when they met to discuss the role. But really, should she have to? It may have been an unfortunate style, but it's just hair.