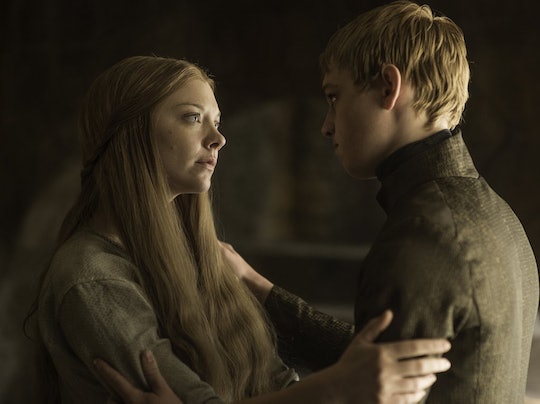 If Season 6 of Game of Thrones taught us anything, it's that you can never trust having any faith in Westeros and beyond. In the past couple of episodes, we've seen Sandor Clegane lose his new mentor, Arya get stabbed, and Margaery give in to the High Sparrow. This is all in a couple of episodes that were each less than an hour long, mind you. But I think we all know Margaery is not going to go down like that, right? The Game of Thrones theories about Margaery that are currently floating around the internet are all about her plans and scheming since she is a Tyrell woman after all. You aren't raised by the Queen of Thorns without learning a few things from the woman.

The theories about Margaery range from her concocting plans to kill herself before anyone else can hurt her, to coming up with a plan to eventually beat the High Sparrow at his game. Basically, anything can happen to Margaery at this point. She sent her grandmother back to Highgarden, her brother is still imprisoned, her dad, Mace Tyrell, has never been much good to anyone, and her husband is currently heavily brainwashed. Right now, it's all up to Margaery to figure out how to get herself out of the current mess of King's Landing. And if that means waiting out The Faith's hold on the crown, that may be the case.

The most important Margaery theories are all about the young queen doing pretty much whatever she can to ensure the safety of those most important to her. I.e., definitely not those of the Lannister clan.

Margaery may have agreed to follow The Faith now, but anyone can see that it was obviously just to get herself out of prison, and it totally worked. In Episode 5 of Game of Thrones, Margaery was urging Loras to be strong and wait it out and that he'd soon be free. This is obviously part of that plan, however long it will take her to enact it and gain the trust of the High Sparrow.

Her Plan Is To Get Tommen In The Trial By Combat

This theory is pretty wild, but as with Game of Thrones, not completely out there. Since The Faith has yet to name a champion to fight on their behalf for Cersei's trial by combat, this theory entails Margaery urging Tommen to fight for The Faith. Before you point out that Tommen has never fought anyone, ever, remember that Margaery also seems to have very little feelings toward her husband right now, since you know, he let her get thrown into the dungeon and all. This theory would also confirm the prophecy of Cersei seeing all of her children die, and although Tommen is just a kid, how awesome would it be to see Cersei hurt like that?

The High Sparrow Is Definitely On To Her

Margaery is smart when it comes to scheming, but so is the High Sparrow. He went from being shunned by Cersei to being able to arrest her, along with two other highly important high-born individuals. But his desire for control over Tommen is clearly overshadowing his need to get Margaery out of the way. Since he'd do well to have Tommen's queen by his side, given that the people already love her so much, the High Sparrow may just be biding his time.

Margaery Will Sacrifice Herself For Loras

We just saw her, in Episode 5, telling Loras to be strong and that she would get them both out of their current problem. We then saw that to be true when she claimed to believe in The Faith and stood by Tommen's side for all of Flea Bottom to see. But we also saw Margaery look like more of a zombie than her former lively and smirking self. She also sent Olenna Tyrell away, with a tearful sort of goodbye. And if she offers herself in place of Loras, it could very well be enough for the High Sparrow.

She's Going To Get Pregnant ASAP

There has to be a reason why we saw the High Sparrow talking to Margaery about her sex life with Tommen in Sunday's episode of Game of Thrones and it wasn't just to show us how creepy the guy is. It also reminded viewers that the whole point of a union between Tommen and Margaery is to procreate. And although Margaery admitted to not wanting to get busy with her king, it would be a good idea to secure her place at the crown. So if anything does happen to her impressionable husband, she'll be carrying around his only heir.

Game of Thrones theories are pretty much the life blood of the show. There is never a shortage of them, and when you involve one of the stronger female characters like Margaery, it only makes sense that fans would develop ideas about her motives and the endgame for her story. Unfortunately, we only have three more episodes of Season 6 during which to see her plan (whatever it may be) play out, but a lot can be done in 188 minutes.