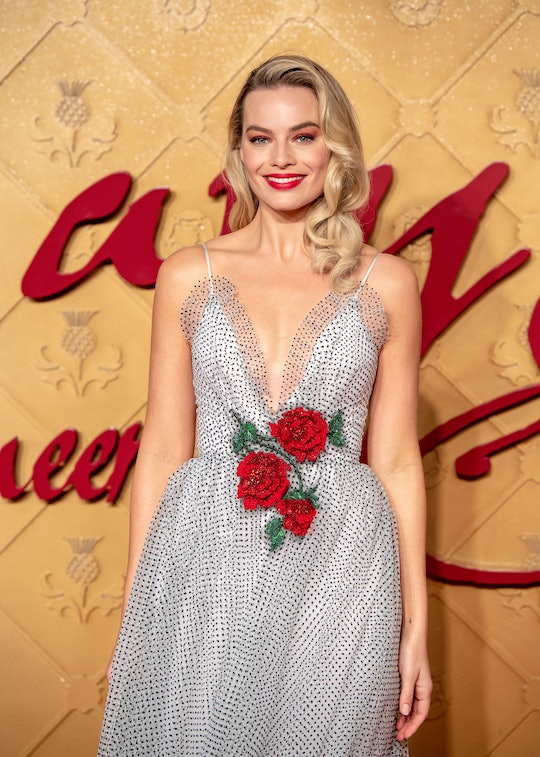 Margot Robbie is an Oscar-nominated actress currently on a press tour for her new film, Mary Queen of Scots, after which she's set to reprise her role as Harley Quinn in an upcoming DC superhero flick, and star in a live-action Barbie movie. And, oh yeah, she also runs her own production company on top of that, because she's a total boss. Despite all of her hard work and achievements though, people still seem to be obsessed with the current state of her uterus. But it turns out that Margot Robbie has no time for reporters asking her when she'll have a baby, and she's not afraid to tell them so.

The 28-year-old Australian actress got hitched two years ago to filmmaker Tom Ackerley, but even though it seems pretty clear that she is more than happy to be super busy with her incredibly successful career at the moment, she recently told Radio Times magazine that she continues to be asked regularly about when she and Ackerley plan on having children, according to Sky News. Robbie said,

Unfortunately, it's a conversation we're still having. I got married, and the first question in almost every interview is 'Babies? When are you having one?' I'm so angry that there's this social contract. You're married, now have a baby. Don't presume. I'll do what I'm going to do.

Robbie's experience is one that many young women will likely relate to, because you definitely don't have to be a famous actress to feel as though the entire world is expecting you to procreate immediately after tying the knot. But in Hollywood, that expectation seems particularly unavoidable, thanks to tabloids filled with "bump watch" photos, online speculation, and just the general fact that celebrity baby news is a huge, headline-making deal.

But Robbie clearly knows that asking her about having a baby is problematic on *so* many levels. For one, it downplays all the actual hard work she's putting into her career at the moment — work which she would likely be unable to focus on in the same way if she were also a mother. According to BuzzFeed, Robbie opted to start her own production company when she found herself frustrated by the lack of quality roles for women, and explained,

But beyond ignoring Robbie's other achievements, questions about babies and pregnancies are fundamentally problematic for *all* women. For one, Robbie may not even feel the desire to have children, which is not only totally fine and completely reasonable, it's also nobody's business, and a choice open to everyone.

Yet, Robbie is also likely very well aware, that, in Hollywood, that's not quite an acceptable answer. The fact that, Jennifer Aniston, for example, continues to be plagued by tabloid pregnancy rumors at 49 years old, while happily single, more than illustrates the fact that, for some reason, we still struggle to accept that a woman could be totally fine deciding not to ever have a child.

Then there's the fact that, asking a woman about her motherhood plans can be incredibly insensitive to the fact that many women struggle to get pregnant or stay pregnant, and that not having children isn't necessarily a sign that they simply haven't thought about it, or are choosing to wait. And that's something other celebrity women have discussed in the past as well: in Sept. 2015, Teigen spoke about her fertility struggle to Tyra Banks on FABLife, according to Us Weekly, and said,

I can't imagine being that nosy, like, 'When are the kids coming?' because who knows what somebody's going through, who knows if somebody's struggling? I would say, honestly, [that] John and I were having trouble. We would have had kids five, six years ago if it had happened, but my gosh, it's been a process.

Finally though, there's the fact that the question itself is one posed almost exclusively to women, just reinforcing the arbitrary idea that, somehow, emotional labour and caregiving is supposed to be innate to females. While there are many Hollywood dads who are loving and super-involved caretakers, it's rare that they ever get asked about it in interviews (when is the last time you heard a male actor asked how he "balances work and family?").

If reporters are able to come up with enough questions about an actor's work to not have to inquire about their kids, it seems they should certainly be able to do so for an actress like Robbie, who has more than enough on the go right now to discuss in an interview.

Margot Robbie certainly isn't the first celebrity woman to face this issue, and she also won't be the last. But by speaking up about it, she's at least helping to push back against the expectation on women to have kids, and continue the conversation that it's really nobody's business what a woman does or doesn't do with her body.