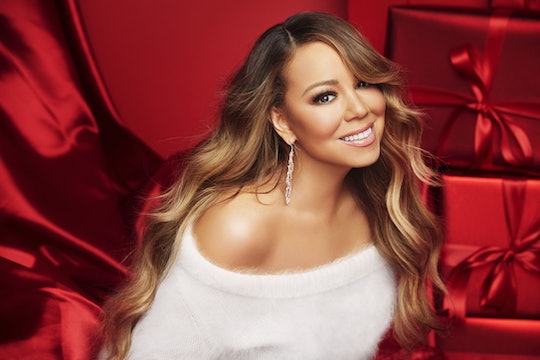 It's Official: Mariah Carey Declared It's Time For All Things Christmas

Break out the twinkly lights, mistletoe, and all those ugly holiday sweaters because Mariah Carey's new Christmas video, shared one day after Halloween, declared it's time to start celebrating. Yes, it's official. It's time to transition from the ghoulish spirit to the ho-ho jolliness of the most wonderful time of the year so we can all get through the Grinchy-ness of 2020.

In the video Carey shared on Nov. 1, a black-robed ghoul in a scary mask makes its way through the 50-year-old pop star's house. The ghoul then opens a cob-webbed door to reveal the songstress in a snowy room wearing her own custom Christmas pajamas.

"It's time," Carey announces in the video, smiling and cheering while jingling a bell. As Carey screams in excitement, "It's Time! (But let's get through Thanksgiving first.)" appears on the screen as her classic holiday hit "All I Want For Christmas Is You" plays in the background.

Carey's Christmas announcement was music to many fans' ears, including a few of her celeb friends like Jennifer Hudson, who commented under the video saying, "No need, let’s go! My Christmas music starts today!" And Tamar Braxton commented, "You are my best friend and that’s all to that story period."

Carey's fans, affectionately known as lambs, have started calling her the "Queen of Christmas." Last year, Carey shared a similar Christmas video teasing the holidays. In the 2019 clip, the "Christmas (Baby Please Come Home)" singer was asleep, dressed as an '80s rocker for Halloween. When the clock strikes midnight on Nov. 1, she receives a call from Santa Claus and suddenly changes into a Christmas onesie.

This year, Carey has some exciting holiday surprises on the way. Back in October, Carey posted about a possible Christmas musical collaboration on Instagram with a photo shows three chairs with the initials, "AG," "MC," and "JH", which fans have speculated could stand for Carey, Ariana Grande, and Jennifer Hudson.

And in August, Apple TV+ announced the pop legend is making a special appearance in the upcoming holiday special, Mariah Carey's Magical Christmas Special. The holiday special will debut globally on Apple TV+ and will include a star lineup of guest performances to bring in the "reason for the season" around the world. It also will commemorate the 25th anniversary of Carey's holiday classic, "All I Want For Christmas Is You," which recently reentered the Top 100 list on iTunes.

Beyond her holiday special, Carey recently released a new album called The Rarities and has an autobiography, The Meaning of Mariah Carey, which is a New York Times Bestseller.

Aside from getting in the Christmas spirit, it seems like her kids had a great Halloween. Carey shared a spooktacular video on Instagram of her twins, Moroccan and Monroe, in their costumes. "Happy Halloween!!," she captioned the video. "Roc and Roe turned me into Mariah Scared-y last night."