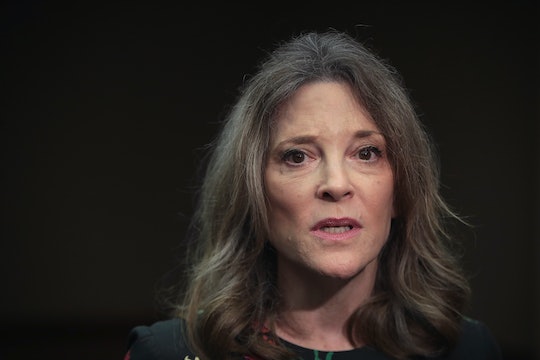 Spiritual adviser and author Marianne Williamson was arguably the breakout star of the Democratic debate in Detroit, Michigan on Tuesday night, a not-so-surprising turn of events given her knack for one-liners. And throughout the night, she delivered a handful of truth bombs on various issues, with many of her comments generating buzz on social media. Just one example? Marianne Williamson's monologue on reparations received a round of applause from Twitter, mostly because her take hit the nail on the head.

Williamson stands out as a presidential candidate because she's a confidante and adviser to Oprah Winfrey, a resumé that is unique. But here's the thing: Just because voters haven't heard from her in a political sense, it doesn't mean she isn't worth listening to. There were a few times, for instance, when Marianne Williamson was arguably the most magnetic, engaging, and passionate person on the stage. And she might have surprised some viewers with her insightful takes on the pressing issues Americans currently face. This sentiment was on full display when she tackled the topic of offering reparations to the descendants of slaves across the United States.

Williamson has gone on the record to say that, as president, she would offer somewhere between $200 and $500 million in reparations to descendants of slaves, according to The New York Times. And when she was questioned by a CNN mediator about this choice, she rose up to defend the math behind it. First of all, she pointed out that the money shouldn't be considered "assistance" but rather "payment of debt that is owed."

Williamson continued, according to The Week:

We need to recognize that when it comes to the economic gap between blacks and whites in America, it does come from a great injustice that has never been dealt with.

She went on to note that freed slaves were offered "40 acres and a mule" in the 19th century. And then Williamson went on to do some pretty impressive quick math, stating, according to Vice:

If you did the math of the 40 acres and a mule, given that there were 4 to 5 million slaves at the end of the civil war. It would be trillions of dollars, and I believe that anything less than $100 billion is an insult.

Twitter users were pretty quick to jump on board with Williamson's impassioned plea. She even managed to win over some naysayers along the way, with one person writing: "I've been mocking Marianne Williamson all night, but her answer on slavery reparations is actually spot on and incredibly articulate."

Someone else said: "Marianne Williamson on reparations was all like I WILL DO THE MATH RIGHT HERE B****ES WATCH ME, in her Katherine Hepburn accent."

This isn't the first time Williamson has spoken out about the need to offer economic reparations to descendants of slave owners. She told The Hill in April that she believed reparations are crucial in healing the racial divide in America, and that perhaps this would go a long way in educating people on the real history of racism in America.

Whether you end up voting for Marianne Williamson or not, I think many people can agree she knows what she's talking about. And what's more, she believes in what she's saying.