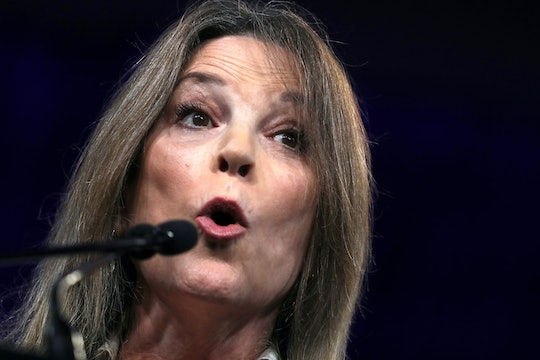 I am something of a fence-sitter when it comes to Democratic presidential candidate Marianne Williamson. If you happened to watch her at the Democratic debates, you probably already know she's a gifted public speaker with a certain sort of magnetism. But then she does something like this and I'm just... sigh. Marianne Williamson's deleted tweet about the Bahamas has Twitter in a fury, and honestly I don't blame them.

Williamson was best known as a writer and spiritual guru (not to mention a personal friend of Oprah Winfrey and frequent guest on her TV show) before throwing her hat into the 2020 presidential election earlier this year. Considered something of an outlier because of her lack of political experience, Williamson actually failed to qualify for the third round of Democratic debates scheduled for Sept, 12, but that hasn't stopped her from hitting the campaign trail and bringing her message of "love in politics" to Americans. It was a message that few people expected would see her in the White House in 2020, but not necessarily a message people took umbrage with in general. Until recently, apparently. On Wednesday Williamson posted a tweet about Hurricane Dorian, the Category 2 storm that left seven people dead in the Bahamas and countless people homeless before moving on to the southeast coast of the United States. She appeared to be insinuating in the tweet, which she later deleted, that people could avoid the storm with mindfulness and meditation.

Romper has reached out to Marianne Williamson and is waiting on a reply.

The Bahamas, Florida, Georgia and the Carolinas... may all be in our prayers now. Millions of us seeing Dorian turn away from land is not a wacky idea; it is a creative use of the power of the mind. Two minutes of prayer, visualization, meditation for those in the way of the storm.

The people of Twitter were not impressed by Williamson's comments about using the mind to turn the storm away from the coast, nor the implication that Hurricane Dorian left Florida because of prayer. Many people took umbrage with the idea that mind power could protect people from a deadly storm, which could be seen as an irresponsible response to a very real danger, particularly coming from a presidential candidate.

Others likened Williamson's cerebral response to a physical problem as one that has become all-too familiar; trying to solve gun violence with thoughts and prayers and moments of silence in the House of Representatives.

Finally social media users called Williamson's tweet out for being insensitive to the victims of Hurricane Dorian by minimizing their suffering. Instead of offering aid or support or real solutions, to simply say that people could have meditated or prayed their way out of the path of a storm is dangerous and callous.

Williamson has since replaced her initial response to the Hurricane Dorian crisis with another tweet, but to be honest this one is almost as problematic for a presidential candidate, "Prayers for the people of the Bahamas, Florida, Georgia and the Carolinas. May the peace of God be upon them and their hearts be comforted as they endure the storm."

Words of comfort and suggestions of prayers are simply not enough to help people who have been left homeless by a hurricane. They need clothes and food and water and shelter.