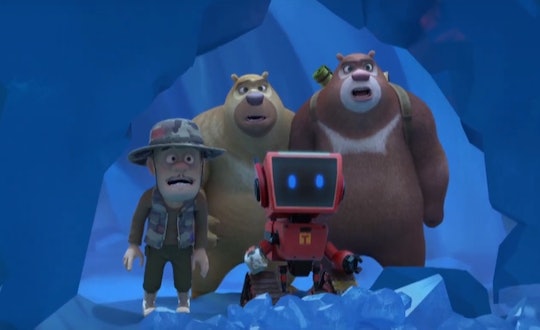 Whenever a movie is born out of a beloved children's TV franchise, it's a special treat. The Boonie Bears TV show premiered on Central China Television in 2011 and spawned six film adaptations in China before the latest, Fantastica: A Boonie Bears Adventure, premiered exclusively on DirecTV in the US. And this exclusive clip from Mario Lopez and Josh Peck's new kids' movie will get you excited to meet some cartoon bears you might not have otherwise become familiar with.

The movie, which will see a limited theater release on June 14, will give kids who may not be familiar with the central characters a chance to get to know them and develop their own love for the bears and their human adversaries. The other movies in the Boonie Bears franchise followed two brother bears on various adventures with a few sci-fi elements thrown in there and this new installment seems to have similar themes that will likely entice kids of varying ages.

This time around, the bears, who are voiced by Josh Peck and Mario Lopez, work with a strong female warrior and a robot to navigate their way through the mystical land of Fantastica and protect an important ancient artifact from a group of thieves. Like I said, there are aspects for almost any age to enjoy. Whether you have access to DirecTV and want to watch it right now or would rather wait for the June 14 select theater release, Fantastica: A Boonie Bears Adventure seems like it has just the right amount of fantasy, science fiction, and charming animation to hold both yours and your kid's attention.

In the clip, the bears come to the defense of Nia, their warrior teammate, as she is cornered by the group of humans after the relic. Just as the three of them are about to get attacked, the villains make a run for their robot, which is apparently a lot more important than it seems.One of the bad guys, who is wearing armor that looks like of like half of an Iron Man suit, picks up a huge boulder to toss at the robot, showcasing his strength and showing young viewers just what these bears are up against this time around. Vick the Logger swoops in at the last minute to save the bear's robot BFF and the good guys get a leg up for at least a little while.

It looks like a lot of the main characters from the animated series will be make appearances in the latest movie which will have a wider release than the other ones, which were previously shown primarily in China. Thankfully, however, it doesn't seem like kids will need to take a crash course in Boonie Bears to appreciate all of the characters' silly quirks. Josh Peck and Mario Lopez are more than capable of bringing these bears to life in the new movie and parents will likely get a kick out of hearing their favorite former child stars voice the bears.

Much like a lot of popular kids' animated series in the US, Boonie Bears' format is made up of 13 minute episodes. These make it a lot easier for some younger viewers to follow and understand plots and make for easy viewings each time. Each episode follows the adventures (and misadventures) of Briar, the older and stronger bear, Bramble, his younger honey-loving lazy brother, and their animal and human friends. The show's main antagonist is Logger Vick, whose goal it is to chop down trees in the forest, much to the dismay of the bears and their woodland friends. It looks like Vick will also play a small role in Fantastica: A Boonie Bears Adventure, but he's not the main villain this time around. In fact, he might be working with the bears for a change.

Right now, it looks like Fantastica: A Boonie Bears Adventure blends the right amount of adventure, fantasy, and humor to make it a fun and easy watch for pretty much anyone.