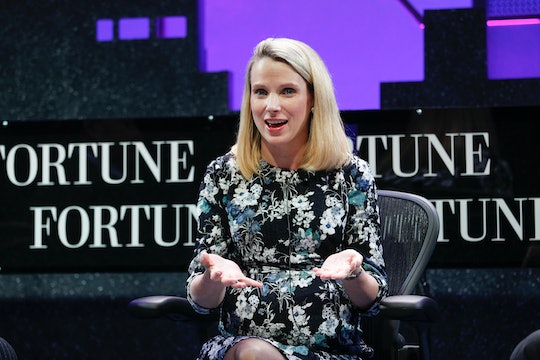 Marissa Mayer Gave Birth To Twins, So She's Had A Busy Week

It's been a busy week for Yahoo's CEO. After coming under fire this week for the company's recent performance, Marissa Mayer gave birth to twins, it was announced Thursday. Mayer announced her baby daughters' arrival on Twitter, saying that the twins are identical and the whole family is doing great. The girls are Mayer's second and third children with her husband, investor Zack Bogue.

Mayer announced her pregnancy on Sept. 1 in a post on her Tumblr, in which she wrote that there is no history of twins in her family or Bogue's. She also announced that, as when she had her son, Macallister Bogue, three years ago, she would be "taking limited time away and working throughout." Critics have questioned Mayer's limited maternity leaves — or at least her being so vocal about them — arguing that it suggests that either maternity leave isn't really necessary or that successful women don't take them. The U.S. is the only developed country without mandatory paid maternity leave, so having one of the world's most powerful women suggest that she doesn't need it doesn't help advocates working to change that policy. Mayer is famous for banning telecommuting at Yahoo shortly after she joined as CEO. She was pregnant at the time.

She's opting for an abbreviated leave this time, she wrote, because "this is a unique time in Yahoo’s transformation." Mayer has been under fire recently for not yet accomplishing a complete Yahoo overhaul and turnaround during her tenure. This week the company announced that Yahoo will not be selling its shares in Alibaba, the Chinese web portal . Instead, it is considering selling off its web businesses. The Guardian noted that Yahoo's stock price dropped slightly when Mayer announced this pregnancy.

No word on the twins' name yet. Given Mayer and Bogue's choice of Macallister for their son, maybe another M name is in store?