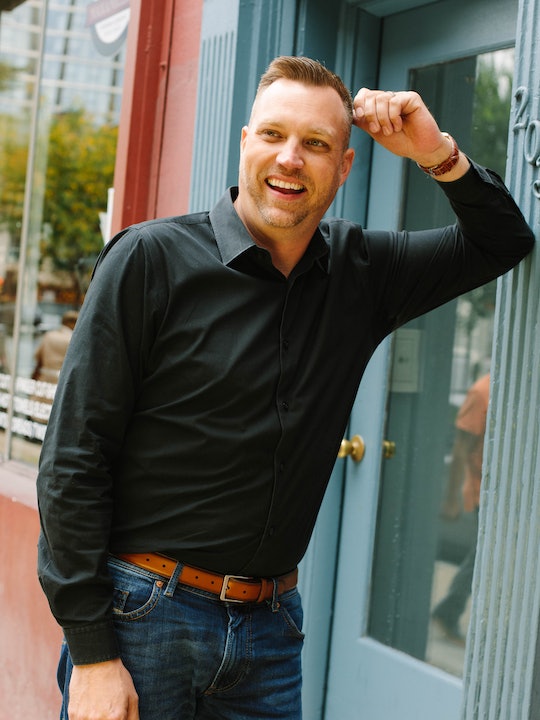 You Won't Get Much Info From 'MAFS' Star AJ's Instagram

AJ and Stephanie might be proof that the Married at First Sight process can really work for some couples. Although they, too, didn't even see each other until they were gearing up to say "I do" at the altar, they seem to be a good match. Because successful couples on reality TV are so few and far in between, though, you might be wondering what AJ’s Instagram is outside of Married at First Sight.

Unfortunately, he keeps it private, so unless he accepts your follow request, you aren't going to get farther than his main photo and Instagram bio. What this does tell you, however, is that despite going on reality TV to find his wife, AJ values his privacy where he can get it.

The couples on Married at First Sight aren't typically looking for social media followers or 15 minutes of fame when they sign up to be a part of the show. And in AJ’s case, it does seem like it was just about finding a wife to settle own with. AJ’s Instagram bio doesn't even mention the fact that he’s on the show. Instead, it has the name of his business staffing firm, Future Force Talent Connection, and the website you can go to for more information. Other than that, though, AJ’s life outside of Married at First Sight is as private as possible and I have a feeling that’s the way he intends to keep it.

Fans have gotten to know AJ pretty well on Married at First Sight and he’s definitely relatable. He has been vocal about his apprehension in getting married period, let alone marrying someone he didn't even know. But after the fact and after spending time with Stephanie with his family and friends, he said that he felt better than ever about their marriage moving forward.

"I’m just happy I can call Stephanie my wife and it’s accepted and even with decision day still four and a half weeks away, I feel like I’m gonna be calling Steph my wife for the rest of my life," AJ said in one episode.

Earlier this season, AJ was also candid about his honeymoon with Stephanie. I’m sure the wedding night is what most viewers wonder about, especially since sexual chemistry can sometimes make or break a relationship. But, according to AJ, they are compatible in that regard too.

"Last night, Stephanie and I slept together for the first time," he said in a January episode. "The timing just felt right. It was natural. Nothing felt forced. It was quite fun, actually."

Obviously there is more to a marriage than sexual compatibility, but it’s still a big deal and AJ and Stephanie seemed to have jumped over that hurdle easily. The fact that AJ is so open about their relationship on Married at First Sight makes me wonder why his Instagram is private, but I guess after allowing cameras into your life for several weeks, you want to leave some things private between you and your new spouse. This is especially true if they have chosen to move forward with their marriage out of the spotlight completely, rather than interact with Married at First Sight fans on social media.

There is the off chance that AJ will make his Instagram account public once the season is over. Some of the mystery in Married at First Sight is wondering if these couples can make it and last until the end of the season without splitting up. For that reason alone, it might be easier to keep his Instagram private instead of accidentally spoiling the season. And right now, he and Stephanie are likely enjoying a little anonymity outside of the show.