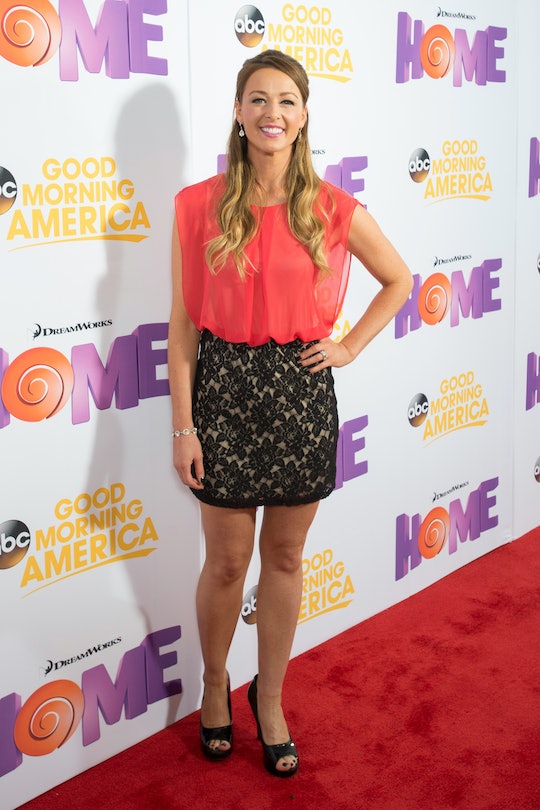 As common as miscarriage may be in the first trimester, it's hard not to excitedly hope for the best when you realize you're pregnant — even if you've experienced a prior loss already. And while some women may choose to keep their pregnancy news under wraps in the early weeks, others, like reality television star Jamie Otis, opt to share it openly either way. Unfortunately though, that sometimes means having to give some heartbreaking updates: though she recently shared that she was expecting again, according to E! News, Married At First Sight's Jamie Otis has suffered another miscarriage.

Otis first revealed that she was expecting a sibling for her 16-month-old daughter, Henley, in an Instagram post in December, when she uploaded an adorable clip of her little girl wearing a Christmas-themed onesie that read, "Santa is promoting me to big sister." In the post's caption, Otis explained that she and husband, Doug Hehner, were beyond psyched with the news, but it wasn't *just* that they were looking forward to giving Henley a sibling. Only a few month earlier, in September, Otis announced that she'd had a very early loss — known as a chemical pregnancy — only two days after posting a faintly-positive pregnancy test on Instagram.

There's no doubt that having your pregnancy hopes dashed so quickly by a miscarriage is heartbreaking, and, sadly, the chemical pregnancy was also far from being their first loss: in 2016, the couple also lost their son, Johnathan Edward, at 16 weeks.

In a follow-up post to her September miscarriage, Otis wrote, "I don’t know why some people have it seemingly SO easy to get preggers & carry their babies to term and others struggle," yet it seemed like learning she was pregnant again a few months later at least gave the couple hope. After making the announcement, Otis began sharing pregnancy posts, including bump updates for weeks 8, 9, and 10, as well as an adorable pic of Henley alongside an early ultrasound photo of the baby-to-be.

But in her 10-week bump update, which she posted Thursday, Otis shared that she'd already been having some concerns, including the fact that she'd had some mild bleeding and cramping through weeks 6-8. As a labor and delivery nurse herself, Otis likely knew that wasn't necessarily cause for concern: according to Parents, light bleeding occurs in an estimated one-third of pregnancies, and isn't usually a problem.

But after a tech was unable to find the heartbeat on an ultrasound, or visualize the baby on the screen, Otis understandably grew worried, and the next day, she sadly confirmed that while the "baby formed and there was an amniotic sac," the they had, at some point, stopped growing, leading to what's known as a "failed" or missed miscarriage.

As upsetting as it certainly is to learn at 10 weeks that your baby has stopped growing, it's also not at all uncommon. According to the Mayo Clinic, among women who know they are pregnant, an estimated 10 to 20 percent of pregnancies end in miscarriage, and according to the March of Dimes, most of those losses will occur before the end of the 12th week.

But since Otis, like many women, had a missed miscarriage — aka the loss was detected, but the embryo and placental tissues hadn't yet been passed — it meant she still had to decide whether to have a D&C, take medication that would prompt the miscarriage to occur at home, or just wait and see if it would happen naturally. Ultimately, Otis said she opted for the medication, which meant she could hopefully at least avoid going to the hospital.

As heartbreaking as it is to hear that Otis and Hehner have once again experienced a loss while trying to grow their family, the fact that they're willing to be so open about it is incredibly valuable — not just for the women who have had similar experiences, but also for those who will in the future. Even though we know, after all, that miscarriage is super common, it's still rarely something people feel able to speak about, and the taboo surrounding pregnancy loss is why it's pretty much expected at this point that couples who are newly-pregnant won't actually reveal the news publicly until after the first trimester, when the risk of miscarriage drops.

The fact that Otis was willing to share her pregnancy news so early on though is so admirable, because there's no reason why an excited pregnant woman shouldn't be encouraged to celebrate her happy news. And if an early loss *does* occur? There also shouldn't be any shame in having to reveal it. As unfortunate at it is that Otis is no longer pregnant, her example has at least helped to advance the very much-needed public conversation about miscarriage. And hopefully that's something she can feel proud of as she and Hehner try to move forward and heal.

More Like This
Meghan Trainor Shares Baby News After Dropping Hints On TikTok
The Best Dressed Parents At The 2023 Grammy Awards
Adele’s Grammy-Nominated Album Features A Beautiful Song Written For Her Son Angelo
Marie Kondo Gives Up Tidying Post-Kids, Sparking Joy For Moms Everywhere
What Parents Are Talking About — Delivered Straight To Your Inbox