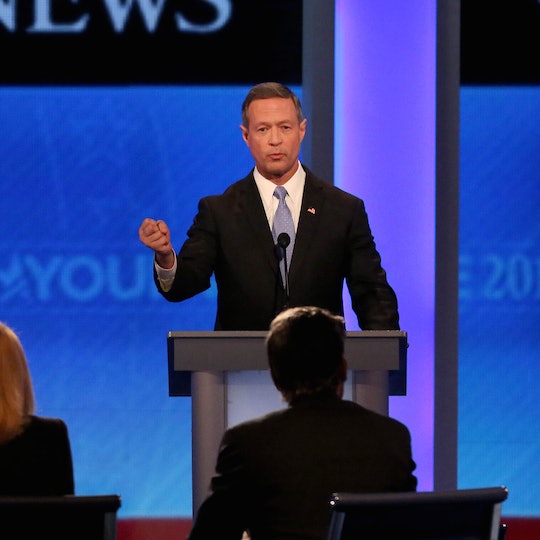 After an evening of sparring with Hillary Clinton and Bernie Sanders, Martin O’Malley’s closing statement at the ABC Democratic debate focused on making changes for "the future." The statement followed a very aggressive, if not strong, debate performance, which isn't surprising considering that O'Malley has been pretty good at the debates since the beginning of the election cycle. He's not a super well-known candidate, and his poll numbers lag far behind his opponents', but he does know what he's doing. It's more that Hillary Clinton and Bernie Sanders, the two leading candidates, just overshadow him.

Before the last debate in November, the O'Malley campaign said they were planning to get "aggressive." And he did: he spoke eloquently and convincingly, even if the Maryland governor he did mix up the President of Russia with the President of Syria. Overall, O'Malley has approached the debates as opportunities to forward his progressive position on a variety of issues. He has used the past two Democratic showdowns to weigh in on Russia's invasion of Syria, calling it a "blunder." He often uses the debate platform to complain about the theatrics of the election cycle and the debates, which might be one reason he is lagging in polls.

So how did Martin O'Malley's closing statement at the Democratic debate Saturday measure up? He focused on generalized ideas about his campaign and was the only candidate to talk about climate change during the debate:

Tonight what you listened to was a healthy exchange of ideas about how we do that that which we have always proven at a capacity to better than any other nation in the world... When you listened to the Republican debate the other night, you hear a lot of anger and a lot of fear. They can have their anger and they can have their fear. Well, they can have their anger and they can have their fear. But anger and fear never built America.We build our country by adopting wage and labor policies including comprehensive immigration reform with a pathway to citizenship for all. We do it by investing in infrastructure, by investing in the skills and the talents of our people with debt free college and we can do it again. And we can also create a better future when we square out shoulder to the great challenges of our times — whether it's the terror trying to undermine our value or Republican presidential candidates trying to get us to surrender our freedoms and our values in the face of this threat.

The other big challenge we have is climate change, the greatest business opportunity to come the United States of America in a hundred years. we need to embrace this. I have put forward a plan that does this. That moves us to 100 percent clean electric grid by 2050. Join this campaign for the future.

Twitter was torn about O'Malley, but liked his plug for climate change legislation.

The truth is that O'Malley appears to have no real chance of being president and not just because he has a kilt. He’s polling at 5 percent these days. But he is a serious candidate in that he has informed policy ideas and the passion to back it up. Maybe next round.