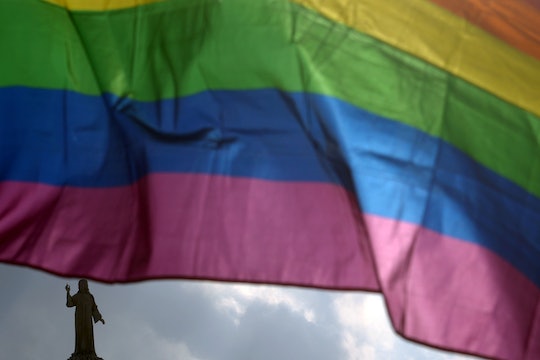 Last month, Massachusetts made news for its refreshing reversal on a disturbing national trend that has been quite the political flashpoint lately: barring transgender people from using the public accommodations of the gender with which they identify. While states like North Carolina and Mississippi have passed laws this year that legally condone discrimination against transgender people — and a smattering of others are challenging President Obama's recent directive to protect trans students in public schools nationwide — Massachusetts' state Senate passed a "bathroom bill" of its own to ensure transgender people in the state have equal access to restrooms and locker rooms. And on Wednesday, the state's House also passed a version of the bill. Because the Massachusetts' Republican governor has already promised to sign the legislation, it will almost certainly become law — and proponents of equal rights know that Massachusetts' transgender protection bill is a major step in the right direction.

In what the State House News Service called an "emotional" hearing, the bill passed 116-36, despite the fact that opponents from the Massachusetts Family Institute showed up to protest, and that critics of the bill claim that it will make women and children vulnerable to abuse, an assertion that is unequivocally false. ‌

Some, like conservative lawyer Matt Sharp, went as far as to equate trans rights with the potential for them to engage in rape and molestation. But BuzzFeed reported that although 17 states and 225 cities allowed trans people to use the bathrooms that correspond with their gender identities at the time the Senate bill passed, there has not be even one reported instance of abuse perpetrated by a trans person in that situation.

In fact, Massachusetts' newly passed bill (which will almost surely become law, because Gov. Charlie Baker has promised to sign it) not only actively refutes the idea that trans people are predators, but it simply works to make public spaces more inclusive and equitable for all people.

Since North Carolina passed its controversial House Bill 2 earlier this year, some people and even law enforcement officials have worked to keep people who do not fit neatly into a gender binary out of certain bathrooms, effectively creating a problem where there had never been one before. In April, for example, a video of police forcing an unidentified American woman from a women's bathroom because, as a butch lesbian, she did not have traditionally "feminine" characteristics surfaced, causing huge buzz across social media and news headlines.

The general consensus among police, coincidentally enough, is that laws that bar certain people from certain bathrooms are pretty much unenforceable.

During the House hearing in Massachusetts Wednesday, Republican Rep. Sheila Harrington said that she while she now supports the bill, she opposed a similar one in 2011 because she "wasn't listening with an open mind or open heart." Noting that she's Catholic, she said:

I'm here today to say that I know now that when I spoke five years ago I was wrong, wrong on a number of levels. Because I opposed this bill as I said, I am well aware of the arguments made against it because I made them, I made them myself. But I also now know why these arguments are wrong... I support this bill fully because of my faith, not in spite of it.

The evolution in Harrington's thinking has proved to benefit to equal rights activists, trans people, and people who want to live in a fair and accepting society, and represents hope for people like North Carolina Gov. Matt McCrory and Massachusetts Family Institute president Andrew Beckwith, who once said that the bathroom bill would "force women to undress or shower in the presence of men."

While many, like former Republican presidential nominee Ted Cruz, maintain antiquated, offensive, and uninformed opinions about what it means to be transgender, the developments in Massachusetts are a light in the darkness.