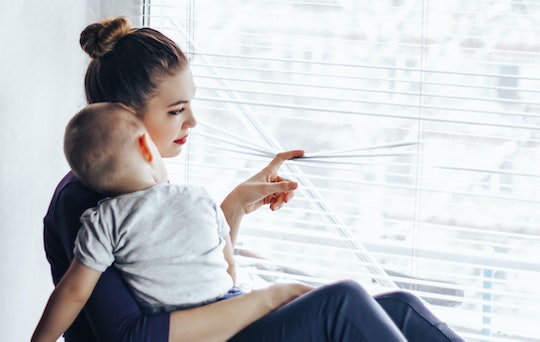 I had postpartum depression. Twice. The symptoms manifested differently from my first birth to my second, and long story short, it was much harder to find the proper support from medical professionals the second time around. Maternal mental health (MMH) is a topic that is not new and not rare, but raising awareness about the maternal mental health disorders, which are the top complication of childbirth, is of the utmost importance.

Enter Joy Burkhard, founder of 2020 Mom, who recently launched the Maternal Mental Health Story Bank, an online resource for moms struggling with MMH disorders. Burkhard's mission to support moms through the most stressful period of their lives is catching fire ,and I for one, am completely here for it.

Burkhard herself was at high risk for developing postpartum depression when her son was born because she had previously experienced a brief bout of depression. "My story is one of support while I was 'walking the line,'" she tells Romper. "After the birth of my son, who was admitted in the neonatal intensive care unit, I was completely exhausted from over 24 hours of no sleep after being induced at 11 p.m. only to labor for more than 12 hours for him to be born at 12:42 p.m. the next day. The pressure to pump every two to three hours while attempting to breastfeed when I had literally no milk was the icing on the cake. I was a new mom on the brink. What saved me from falling off the ledge into a deep dark depression was my husband."

After her own birth experience, Burkhard learned of another mom who had been inspired to begin learning more about how to help women address MMH concerns. "She read about an Olympic athlete whose twin sister tragically took her baby’s life before taking her own. Later, the woman’s family discovered she had searched for help for postpartum depression on her computer," Burkhard says. "This inspired the young mom to raise an idea for a California law through the Junior League ⁠— a women’s volunteer organization. The legislature ultimately urged volunteers to form a coalition to address maternal mental health."

Burkhard's personal experiences, including losing a brother to suicide, combined with her prior work in health insurance quality management and compliance, led her to form such a coalition in 2011. Ultimately, this coalition became 2020 Mom.

Recently, 2020 Mom surveyed nearly 850 moms of varied ages and backgrounds to find out exactly what is causing stress for moms, and the results are a bit overwhelming, to say the least. As reported by the survey, 59 percent of moms feel stressed daily, with 15 percent reporting that they feel "very stressed." The survey also concluded that the top stressful time period reported by moms is the week following birth, with actually giving birth coming in second, and the entire first year of life ranking as the third most stressful time period. To sum it up ⁠— most moms are stressed and new moms are even more prone to stress.

"Having any major surgery is an extremely stressful situation. Birth, regardless of whether there are incisions, is an equivalent experience. Add to it the need to care for and pay for a brand new fragile being who needs 24-hour care (often without a routine or practical support such as a supportive spouse), and just about anyone would eventually reach his or her breaking point," Burkhard says. "Anyone who has ever experienced this time, or could imagine this in a meaningful way, knows we must do better as a society.

With all of this stress placed squarely on the shoulders of new moms, part of Burkhard's mission is to find more support for women experiencing stress during this time period.

"Support is often not readily available and moms are often programmed to think they should be able to manage it all. But all young families and those who interact with them should absolutely be thinking about support networks," she says. "We know that women especially have a need to share with each other, and that sharing our stories of hardship can be healing. We absolutely want moms to know they are not alone ⁠— that these same experiences are happening to other moms. While experiencing motherhood and caring for precious new life, moms often feel ashamed to voice their pain and struggle."

In addition to the support women can find by browsing the story bank and the empowerment they can gain by sharing their own stories, moms can also take part in the The Blue Dot Project, an initiative to raise awareness for MMH created by mom Peggy O’Neil Nosti while she was battling postpartum anxiety. Moms can post the Blue Dot symbol to their social media profiles, wear Blue Dot t-shirts, and even slap a magnetic Blue Dot on the back of your mom-mobile to let others know that they're not alone in their journey through MMH issues in order to combat stigma and shame surrounding MMH.

Spreading awareness mom to mom isn't the only way that Burkhard and the rest of the 2020 Mom and The Blue Dot Project partners are working to effect change for MMH. Burkhard says that sharing stories of women's experiences are "powerful in effectuating change with law makers and the media" and that helping advocate for paid family leave is one way in which society can work together to support new moms after childbirth.

"Paid family leave, which would allow a mother to take at least six weeks of paid time off to care for her child or a spouse to care for a mother who had a complicated birth such as a C-section, is an obvious first simple step in supporting new families," she says. "Some states now offer some type of paid leave, as are some employers (Target being the most recent to offer minimal paid leave), but we believe all moms, regardless of where she lives or who she works for, deserve paid leave and that this should be addressed through federal legislation that both republicans and democrats come together to draft."

This is the first step, but it isn't the only way that new legislation could work to better support families. "In addition to paid family leave, policies like removing tax on diapers and early parenthood tax credit, reduce stressors. We also need to work on improving diagnosis and treatment of maternal mental health disorders (depression, anxiety, and the rare but serious psychosis) that stress can lead to," Burkhard says. "When we as families and society are paying for health and mental health insurance benefits, the health delivery system ought to work; moms ought to be screened, and receive the treatment they so deserve and are entitled to."

If you or someone you know is overwhelmed by the stress of motherhood and are in need of support, there are plenty of great resources over on the Mom 2020 and The Blue Dot Project websites to help you start the process of healing and support others in their journey as well.