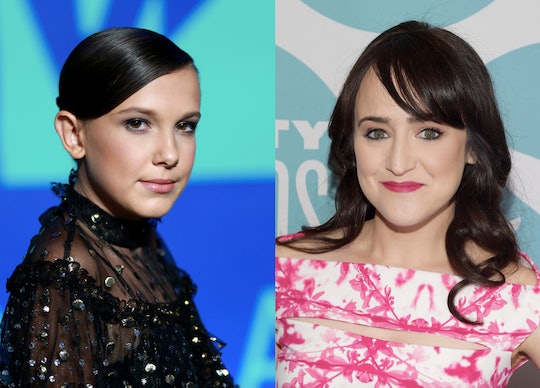 Anyone who has watched Stranger Things on Netflix is more than aware of the young actress who plays Eleven, Millie Bobby Brown. She has become something of a phenomenon, revered on social media platforms by adult fans all over the world. Discussed ad nauseam by the media in general, not for her acting abilities, necessarily, but because she is considered beautiful. Some might even say she's being sexualized, but she is only 13 years old. But, unfortunately, what's happening to Brown is not that rare, and Matilda actress Mara Wilson has a message about sexualizing young girls that should be required reading.

More Like This
Queen Elizabeth Has Given Her Royal Approval For A New Line Of Beer
Exclusive: Teen Artist Tyler Gordon Reveals The “Ultimate Hero” He Wants To Paint
Halle Berry Shared A Beautiful Throwback Pregnancy Photo On Mother’s Day
15 Of Jennifer Lopez’s Best Motherhood Quotes

Wilson was acting from the time she was 5 years old; fans recognize her from movies like Matilda, Mrs. Doubtfire, and the 1994 remake of Miracle on 34th Street. In a recent essay for Elle magazine, Wilson recounted a story about an adult male fan that is beyond disturbing:

His name was Don, or maybe Doug. He was a grown man, one I’d never met, and he wanted me to answer his fan letter. His writing was hard to read, but I could make out just enough: “I love your legs,” and “Can I have your lip print on the enclosed index card?”

Sadly, Wilson said that the man's comments were not even that unusual for her at the time.

Wilson went on to note that, by the time she hit puberty, the media became very comfortable with discussing her body. She found articles that referred to her as "ugly" or "cute," but the main theme of these articles appeared to be discussing her as an object in general, according to a piece she wrote for The Guardian.

And now, she sees history repeating itself with Millie Bobby Brown. In her article for Elle, Wilson praised Brown as an actress... but had some strong words for those who are only talking about her beauty or making sexualized comments about how much she's grown:

Last week, I saw a photo of her on Twitter, dressed up for a premiere. I thought she looked like a teenage girl. The caption, however, read that, at 13, she "just grew up in front of our eyes." It had been tweeted by a grown man.

I felt sick, and then I felt furious. A 13-year-old girl is not all grown up.

I have seen evidence of this sort of behavior before, with child actresses like Emma Watson, Natalie Portman, Scarlett Johanssen, and the Olsen twins, Mary Kate and Ashley. As Wilson noted, several media outlets have even taken to posting "countdown clocks" to let people know when one of these young actresses is "legal," and therefore fair game for inappropriate fantasies. Even W Magazine recently listed actors who are "making TV sexier than ever" on their cover. Millie Bobby Brown made the cut, although to be fair, the concept appeared to be that TV programming in general is sexier than ever. Still, perhaps different wording might have helped.

Wilson also called out the blame game so many people play when it comes to sexualizing young girls; many people say the girls themselves are dressed inappropriately, so it's their fault they're coming off as sexy. Their parents shouldn't let them go out like that. Those kinds of arguments are essentially blaming everyone but the actual grown up adult men who shouldn't be looking at children as sexual beings in the first place. As Wilson wrote in Elle:

And I don’t think people want to accept, on the extreme end of the spectrum, how many Don-or-Dougs there are out there. Some of these predators might be unreachable, completely unable to understand their actions. Child stars are seen as theirs: their property, their fantasy. Predators can fetishize their innocence and youth without any guilt, because they believe that once a child becomes a public figure, they forfeit their rights to be protected the way a child should.

While these predators might be unreachable, as Wilson wrote, perhaps it's time the media and society in general does not feed that illness, which can lead to sexual abuse.

Our only job is to protect kids, to make them safe from being objectified by a culture that sexualizes people — but women especially — as quickly as possible.

Good on Wilson for sharing her own experience to protect other girls from the same situation.