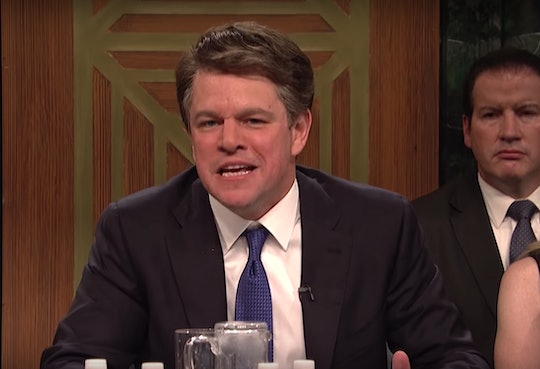 In Saturday Night Live's season premiere this weekend, the cold open spoofed the Brett Kavanaugh hearings from this past Thursday and Friday. While most of the politicians were expertly cast by the show's actors, many on Twitter thought that the actor playing Kavanaugh — President Donald Trump's Supreme Court nominee, who has been accused of sexual assault, allegations he has firmly denied — was a questionable choice. Matt Damon as Brett Kavanaugh on SNL may have made some people laugh, but Twitter was quick to point out the irony of the SCOTUS nominee being played by a man who criticized the #MeToo movement.

During Kavanaugh's trial (or, as Sen. Dianne Feinstein pointed out, his interview for a promotion to the highest court in the country, according to Bloomberg), Kavanaugh drew attention for getting visibly upset and yelling while being questioned. Damon focused on that aspect of Kavanuagh's behavior in his portrayal of him on SNL, speaking with a consistent angry temperament throughout most of the 13-minute cold open.

Sure, there were plenty of tweets praising Damon's performance. But what stood out to many others was the irony. "The audience going wild over Matt Damon – who supported Casey Affleck and said problematic things about sexual assault – playing accused sexual assaulter Brett Kavanaugh is making me uncomfortable," Entertainment Weekly's Jillian Sederholm tweeted after the broadcast.

Many others took to Twitter to criticize the casting choice, pointing out that someone who criticized the #MeToo movement, according to Vanity Fair, should not get to be in a sketch parodying a sexual assault trial.

Here's a little background on exactly why people were so upset with Damon being cast as Kavanaugh.

In early 2017, according to TIME, sexual harassment allegations against Casey Affleck from 2010 resurfaced. He allegedly sexually harassed two women, Amanda White and Magdalena Gorka, on the set of the movie I’m Still Here, as HuffPost reported. The news came into light leading up to awards season, where Affleck was nominated for both Oscars and Golden Globes. Affleck did not comment on the allegations at the time, and HuffPo explained that he was not legally allowed to address the situation due to settlements he reportedly paid to White and Gorka.

When the news was swirling, an anonymous member of the Hollywood Foreign Press Association (HFPA), the organization that runs the Golden Globes, spoke with The Guardian. The member said that in a HFPA meeting, Damon and Ben Affleck:

...both joked that Casey finally needs a Golden Globe. Very much the united front ... and maybe that really protects Casey from real scrutiny. Reminds me a bit of Woody Allen – the liberal press loves him too much to want to really look for the truth.

Then, in late 2017, when the #MeToo movement was raging, Damon made numerous comments criticizing the movement. In December, he told the New York Daily News that people should be focusing on the men who are not alleged sexual predators, instead of talking about the ones that are. He told the publication:

We're in this watershed moment, and it's great, but I think one thing that's not being talked about is there are a whole s---load of guys — the preponderance of men I've worked with — who don't do this kind of thing and whose lives aren't going to be affected.

Earlier that same month, he told ABC News that there's a "spectrum" when it comes to assault, implying that a man who "[pats] someone on the butt" shouldn't be "conflated" with men who rape or molest people. And in that same interview, he also seemingly implied that perhaps Louis C.K. and Al Franken shouldn't have been held quite so accountable for their alleged actions, as Vox reported.

A few weeks later, in January of this year, Damon apologized for his comments. “I really wish I’d listened a lot more before I weighed in on this,” he said on the Today show, as Vanity Fair reported. "I don’t want to further anybody’s pain with anything that I do or say ... So for that I am really sorry.”

It's great that Damon apologized for his remarks, but that doesn't immediately rectify everything. If anything, hopefully this casting sheds light on the fact that a lot of our society still has a lot to learn when it comes to respecting and believing victims.