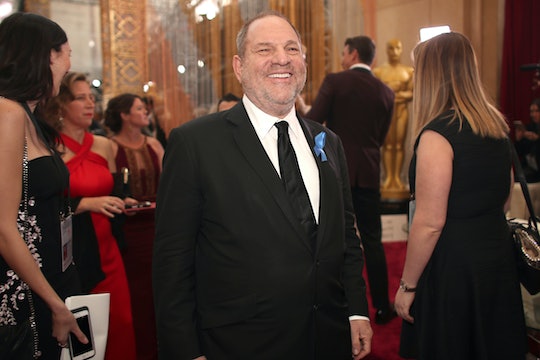 What We Can Teach Our Sons After Harvey Weinstein

As a sexual assault survivor, my chest tightens and my body trembles anytime I read about another man using his power to harass and assault women. So when multiple allegations of sexual assault surfaced against Harvey Weinstein, a famed film producer and former Hollywood executive, I was once against flooded with the overwhelming concoction of pain, guilt, and relief that every victim knows all too well. I am grateful in knowing I'm not alone, and I am sickened that there are so many of us. I am in awe of the now 13 women, according to The New Yorker, who have come forward in the course of a 10-month investigation alleging Weinstein sexually harassed and assaulted them, each facing a wild imbalance of power. And I’m not interested in the reaction of famous men to those 13 acts of bravery. The complicit men in Hollywood and beyond have already failed the test of history, but their inaction is a teachable moment for my son. As he grows up, I can show him that inaction only benefits abusers, reticence is enabling, and proclaiming yourself to be one of the good guys allows you to wave away systemic problems as perpetrated by a fringe element.

As a survivor, a woman, a mother, and a human being, I am less than impressed by the litany of Hollywood male actors who have spoken out in the past week against their former colleague in defense of the women alleging harassment, assault, and, in the case of three women, rape. And that group of men isn’t too big, either. Yes, George Clooney told The Daily Beast he'd heard rumors of Weinstein's behavior as far back as the '90s, and Seth McFarlane admitted to New York Magazine that a joke he told at the 2013 Oscars about Harvey Weinstein was a "swing in his direction." But I see no bravery there. These men had power and a platform and chose not to use it.

These men, with undeniably less to lose than the victims speaking out publicly, have remained silent up until it was arguably safe for them to label Weinstein's unforgivable behavior as, well, unforgivable. With little-to-no risk involved, they've positioned themselves as "the good guys," but are you really the "good guy" if you remain silent and look the other way until it's safe for you to acknowledge what you've known all along? My son will know the difference.

According to an extensive report in The New Yorker, rumors of sexual harassment and assault have been following Weinstein for two decades. "This has been an open secret to many in Hollywood and beyond," the report reads, highlighting failed attempts by numerous publications to surface that "secret" due to stories falling "short of the demands of journalistic evidence." Weinstein's victims were subject to nondisclosure agreements, monetary payoffs, and legal threats that killed the stories, too, forever keeping what was already a known fact from becoming published certainty. Just this week, Matt Damon denied killing a story about Weinstein, as reporter Sharon Waxman alleges.

The New Yorker reports employees describing “a culture of complicity" that allowed Weinstein to terrorize women, with impunity, for over 20 years.

The burden to stop the actions of predators has fallen disproportionately on women, who are threatened, harassed, and assaulted at higher rates than their male counterparts. Men are also victims of sexual assault and rape — an estimated one in 33 men have experienced an attempted or completed rape in their lifetime, according to the Rape, Abuse, and Incest National Network (RAINN), and in the wake of the allegations against Weinstein Terry Crews came forward and revealed he was allegedly sexually assaulted by a male Hollywood executive — but women are at a higher risk. Further, as a result of a prevailing patriarchy and male-dominated hierarchy that allows men to control 99 percent of the world's wealth, women have more to lose.

I will continue to parent my son in a way that not only teaches him to believe and support women, but do the work in the spaces he inhabits — to speak out when it is "uncomfortable" or "uncool."

Men must do better. They cannot wait in the wings, emerging to make their disappointment a talking point only after women have risked their careers, their mental health, and sometimes their safety in order to seek the justice they so rightfully deserve. Men must be proactive in the spaces they hold, especially in the workplace where an estimated one in three have been sexually harassed. And as a mother of a son, who will most likely grow up to be a man sharing public and private spaces with women, it is my responsibility to provide him with concrete examples of what to do, and what not to do, when he witnesses, hears about, or is a victim of sexual assault. The men of Hollywood have failed me in providing my son with those examples. The women have not.

So I will continue to parent my son in a way that not only teaches him to believe and support women, but do the work in the spaces he inhabits — to speak out when it is "uncomfortable" or "uncool." To that end, I will never hold up men like Mark Ruffalo as a role model, even though he tweeted Sunday, "To be clear what Harvey Weinstein did was a disgusting abuse of power and horrible." Yes, Ruffalo is correct and men shouldn't be silent now, but make no mistake: they shouldn't have been silent then, either. And while it's great to have a sea of male voices condemning Weinstein's actions, celebrating men for being decent human beings does a disservice to us all. Saying a bad thing is bad is no more powerful than saying the sky is blue: they are empty words. When action is absent, words of condemnation do nothing.

Instead, I will ask my son to listen to stories like Gwyneth Paltrow's, who told The New York Times in an interview that she was sexually harassed by the man who helped ignite her career. "I was a kid, I was signed up, I was petrified,” she told Times reporter Jodi Kantor.

I will encourage him to imagine what it must be like, at 22 years old and facing a man in a position of overwhelming power. Then I will remind him that these women — these victims — were not "asking for it" or "dressing for trouble," and that their silence is not a reflection of their honesty, but of the rape culture men perpetuate, and protect, with their deafening silence.

I will remind my still blissfully unaware son that, according to the University of Michigan's Sexual Assault Prevention and Awareness Center (SAPAC), the idea that sexual assault victims would have fought back or said something during and/or immediately after an attack is, at best, a common misconception that needs to be wildly debunked:

"Many people have heard of the fight or flight response as the typical responses to danger, but it is actually fight, flight, or freeze. The freeze response is a documented neurobiological condition also referred to as tonic immobility. Tonic immobility is an autonomic mammalian response that happens in extremely fearful situations; it is uncontrollable and not something a person decides to do. Research shows that around 50 percent of survivors experience tonic immobility during an assault. This does not mean the sex is consensual."

And then I will point to the 13 brave women who came forward, publicly, and shared their stories in a now-successful attempt to unearth a well-known Hollywood secret that the men around them allowed to lay dormant. I will highlight the women who've done the work, risked it all, and received a barrage of scrutiny as a result, and demand that my son do the work, too. It is not enough to wait until it's "safe" for men to speak out against the very harassment that allows them to hold positions of power over women.

It's simply not enough.