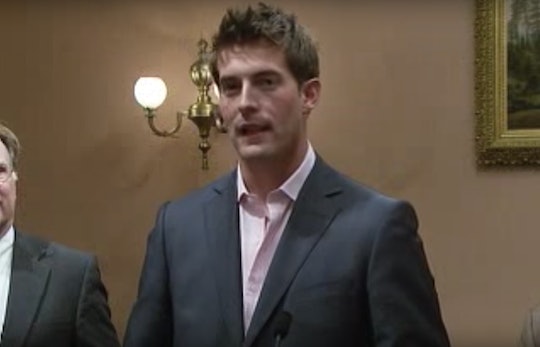 I won't lie to you, guys: I've never put a whole lot of stock in The Bachelor's template for finding love. There, I said it. But a girl can be wrong every now and again, and I'm happy to tell you this time, I was wrong. They may not have met on the set of The Bachelor, but alum Matt Grant just got engaged and looks to be happy as a clam. So all is well that ends well.

British financier Grant was the star of the special 2008 London Calling season of The Bachelor. He met his fiancee, Rebecca Moring, at their local pub in London. The two got engaged on Christmas Eve in Australia. Grant sweetly told People, "I’m so excited and happy to be marrying my best friend."

Grant was previously engaged to 22-year-old actress Shayne Lamas, daughter to actor Lorenzo Lamas, during his stint on The Bachelor nine years ago. They got engaged in May of 2008 and had already broken up by July of the same year. The couple released a statement at the time to People, saying:

We tried hard to make it work but we realized that we were both heading in different directions. We truly care about each other and will remain close friends.

While Grant picked Lamas out of 25 eligible ladies all vying for his hand in marriage, there's no word on how many ladies his present fiancée Moring had to fend off to win his heart.

But win his heart she clearly did; the two are planning to marry later this year at Brympton House, a posh castle just outside London:

It was a much nicer end to what might have been a sad year for Grant; former Bachelor contestant and pilot Erin Storm died early 2016 in a fiery plane crash. She had been one of the 25 women to compete for Grant's heart. When he heard of her death, Grant told Entertainment Tonight in a statement that he was "massively shocked":

Massively shocked. Devastated for her family and friends. We were lucky to have Erin on season 12. She was genuine, self-assured, beautiful and hilarious. Somehow you knew from the first minute of being with her that Erin could pretty much go and do anything. On my season her occupation was listed as Hot Dog Vendor … which surprised me a little bit. From talking to her, it soon became clear she was a smart, entrepreneurial cookie. My thoughts and prayers go out to her loved ones.

What better way to end a sad year than getting engaged to your "best friend?" congratulations to the happy couple — they both deserve all the love in the world.