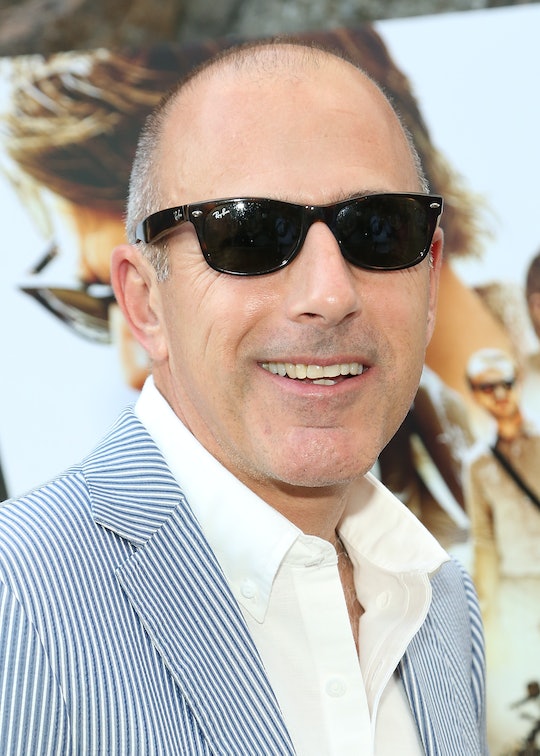 Matt Lauer Will Host The First Presidential Forum, But His Impartiality Is In Question

Another day, another opaque controversy on the 2016 presidential election trail. With the opening of September signifying the inauguration of the debate season, NBC's Matt Lauer will host the first presidential forum next week. It's somewhat of a prelude to the first official debate between Hillary Clinton and Donald Trump scheduled for Sept. 26, but it's nevertheless introducing some drama of its own: Right-wing voters and Trump supporters are questioning The Today Show co-anchor's allegiances based on previous information that he was a member of the Clinton family's charity organization, an accusation that NBC has definitively denied.

NBC recently announced the first-ever Commander-in-Chief Forum, which will feature the candidates appearing onstage back-to-back to answer questions about national security, military affairs, and veterans issues. It'll air live Sept. 7, about a month after the media-wary Trump publicly asserted that he believes that the general election will be rigged against him. So, Trump likely is feeling a bit validated, if less than thrilled, that, according to Mediaite, Lauer was once listed as a "notable past member" of the Clinton Global Initiative, which is part of the much-scrutinized Clinton Foundation. How can Lauer be impartial and fair, the outraged right is asking, if he's aligned himself with Clinton's interests?

The CGI webpage that once boasted Lauer (along with a slew of other prominent journalists like CNN's Anderson Cooper and CBS News anchor Katie Couric) as "notable past members" has since been deleted. And in a statement to Mediate, NBC said that the implication that its Today co-host has been involved with the initiative is dead wrong:

Matt Lauer was not and is not a Clinton Global Initiative member. He interviewed President Clinton from a CGI conference for the Today show’s live broadcast, not for the conference.

According to The Hollywood Reporter, the conference in question occurred in New York City in 2011, when Lauer interviewed Bill Clinton from the Manhattan hotel hosting the Clinton Foundation. But the interview did not take place as a part of the foundation's conference, and Lauer, ostensibly, did not have any other contact with the charity organization — including paying the $20,000 membership fee, from which a Clinton Foundation official told the The Daily Caller journalists are exempt. Romper reached out to the Clinton campaign for comment, but did not immediately hear back.

Mediaite noted that this isn't the first time that the accuracy of the graphic that the initiative publicized has been questioned. Fox Business’ Maria Bartiromo, who appeared on the list alongside Lauer, Cooper, Couric, and 10 others, had previously contacted the outlet to say that she had never been a member of the CGI.

Despite the hoopla that has surrounded the appointment of Lauer as moderator for this the Commander-in-Chief Forum, Trump has agreed to participate, something he did not have to do if he felt that Lauer would not be fair to him. That's good, because it's essential that Americans have the opportunity to hear both Trump and Clinton answering tough questions in real-time, and the forum is one way to accomplish that.