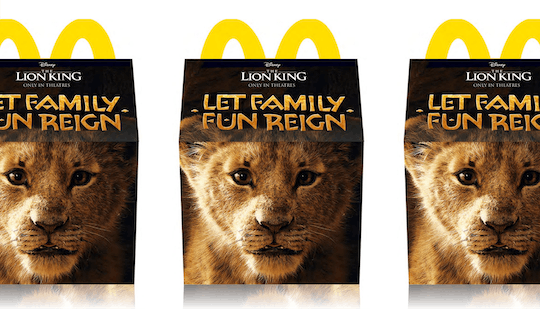 Psst! Your Kid's Happy Meal Might Win Your Family A Free Trip To Disney World

Were you one of those lucky people who managed to get your hands on one of The Lion King toys from McDonald's the first time around? Back in 1994 when the animated Disney film was first introduced and we all thought we were so cutting edge saying "Hakuna Matata" like it was a secret code or something? Well if you missed out back then, I'm here with some good news for you. Not only can you get a The Lion King Happy Meal again, McDonald's is also giving away free trips to Disney World to celebrate the new live-action reboot. Which really could mean no worries for the rest of your days, or at least for your holidays... probably you will have to worry again at some point.

Between July 16 and Aug. 19 of this year, which some might call Lion King season if they so chose, customers who use the McDonald’s U.S. App or at MagicAtMcD.com can instantly enter for a chance win a trip to Disney World. All you have to do is scan codes on game pieces that come with the The Lion King Happy Meals, which are already available in McDonald's restaurants all over the country, and you could win a free trip for a family of four to Disney World. While eating a Happy Meal. Is that not the exact American dream?

There are a total of seven free trips to Disney World up for grabs, and those trips include transportation, accommodation, and entrance into all four Disney theme parks: Epcot, Animal Kingdom, Magic Kingdom, and Hollywood Studios.

Beyond the big prize of the free trip, 250 people can win a $25 Disney gift card by scanning the code from a game piece on the app. There are also millions of opportunities to win free Happy Meals and other food prizes within the same time period, which will come in handy as you try to collect all of the 10 toys from The Lion King that are part of each Happy Meal.

That's right, not only can kids get a cool Lion King-themed white milk jug with their Happy Meal, they can also collect all of the best characters from the movie like Mufasa, Serabi, Simba, Nala, Timon, Pumbaa, and more. If you thought you would get away with one or two toys, here's a little bad news for you. The toys are designed to connect with each other to complete three pivotal scenes from the film: when Simba sings "I Just Can't Wait To Be King," the opening scene when Rafiki holds up baby Simba that people love to recreate constantly, and the log scene when Pumbaa, Timon, and Simba sing "Hakuna Matata."

I hope you're hungry because it's might take a lot of Happy Meals to collect them all. Although the more delicious Happy Meals you eat, the better your chances of winning a free trip to Disney World with your family. So I guess it just makes more sense to eat a bunch of Happy Meals, don't you think?