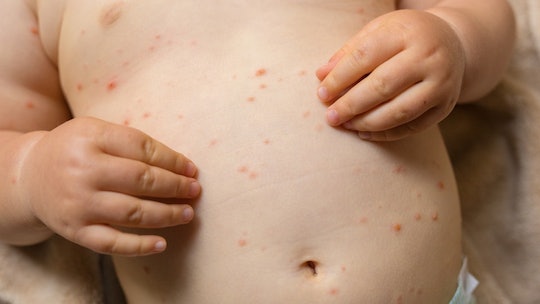 CDC: Cases Of Measles In The U.S. Keep Rising — Reaching 465 So Far This Year

A new report shared by the CDC last Friday, April 5, shows that the number of cases rose by nearly a 100 new incidents within just last week. Added to the previous list of 15 states already affected by the disease are Florida, Indiana, Massachusetts, and Nevada, according to the update. The states that had reported cases of measles this year prior to last week are: Arizona, California, Colorado, Connecticut, Georgia, Illinois, Kentucky, Michigan, Missouri, New Hampshire, New Jersey, New York, Oregon, Texas, and Washington.

The CDC also reports that there are now seven outbreaks — which are defined as three or more cases of measles — across the country compared to the six listed prior to last week’s update. Added to the list of states with outbreaks is Michigan, which now also has a reported outbreak in addition to New York State (Rockland County), New York City, Washington, New Jersey, and California (Santa Cruze and Butte County), which were previously reported.

The total number of measles cases so far this year is “the second-greatest number of cases reported in the U.S. since measles was eliminated in 2000,” the CDC says. The health agency also says that the return and rapid spread of the disease has been fueled by “pockets of unvaccinated people” in addition to an increase in the number of unvaccinated travelers who get measles outside the country before returning to the United States, as NBC News reported.

"The numbers serve as a kick in the butt that says, hey, we probably should start paying attention to vaccination again," Ogbonnaya Omenka, an assistant professor at Butler University with a doctorate in public health, told USA Today. "One of the most challenging aspects of public health is balancing between individual liberty, for people who don't want the vaccine for whatever reason, and what is best for everyone."

In 2018, a study found that the number of anti-vaxx hotspots was on the rise across the United States, NBC News reported at the time. According to the study, vaccine resistance increased in 12 out of the 18 states that allowed non-medical vaccine exemption, including the following states: Arkansas, Arizona, Idaho, Maine, Minnesota, North Dakota, Ohio, Oklahoma, Oregon, Pennsylvania, Texas, and Utah. The study found pockets of resistance in big cities including Seattle and Spokane.

Dr. Peter Hotez, a pediatrician and dean of the National School of Tropical Medicine at Baylor College of Medicine who participated in the study, wrote in the Public Library of Science journal PLoS Medicine:

A social movement of public health vaccine opposition has been growing in the United States in recent years; subsequently, measles outbreaks have also increased.

Currently, three outbreaks in New York and New Jersey contribute to a majority of the reported cases, according to the CDC. The health agency also says that the outbreaks occurred primarily among unvaccinated people living in Orthodox Jewish communities.

Legislators are working to mitigate the anti-vaxx movement due to the dangerous risks it poses. Just last week, New York legislators introduced a bill that would end non-medical exemptions for vaccinations for school children, as reported by The Hill. The proposed legislation would no longer accept religious vaccine exemptions, The Journal News reported.

Health experts strongly recommend that parents vaccinate their children, as the disease is relatively easy to spread. According to the CDC’s guide for parents, the virus is spread through the air when an infected individual coughs or sneezes and has a nine out of 10 chance of spreading.

In order to prevent the spread, the CDC recommends that children receive two doses of the measles vaccine over the course of a few years. The first should be given between ages 12 and 15 months and the second between 4 and 6 years of age.

Because the disease is so highly contagious with numerous outbreaks already spread across the country and the prevention so widely accessible, it is important that parents and caregivers make sure they and their children are vaccinated.