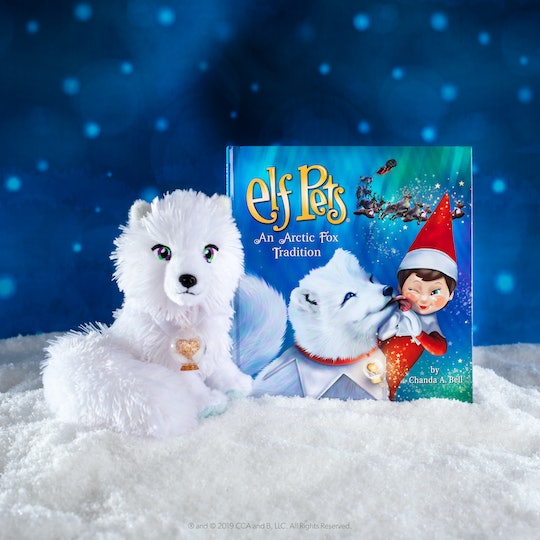 Courtesy of Elf On The Shelf

As kids get a little older, they might start doing the math in their heads and realize that it’s almost impossible for Santa Claus to visit all the good little girls’ and boys’ homes on Christmas Eve. And that’s where Elf Pets: An Arctic Fox Tradition comes in (thankfully) with all the answers.

It might be the second most feared question by parents after “How are babies made?” When your child has enough reasoning to ask, How does Santa get to everyone’s house in one night? what do you say? Do you stutter and stammer your way through a response, or do you (shudder) tell the truth? The Elf Pets: An Arctic Fox Tradition allows you to do neither. The book and plush set tells the story of the Arctic Fox, which is a very special animal, indeed. Not only does he light the way for Santa (did you really think that Rudolph’s nose was going to be able to high beam his way through the clouds globally?), but he’s able to stop time, too. And by putting a pause on the clock, Santa Claus is able to make it all around the world in just one night. The feisty little fox even protects Santa’s sleigh from anything in its way.

In the weeks leading up to Christmas, you can start a new tradition of reading Elf Pets: An Arctic Fox Tradition each night with your child. But unlike the Elf on the Shelf, who is supposed to move while your child is sleeping, your kiddo can score some zzz's with her Arctic Fox, since his big job comes on Christmas Eve only. That means you’ll need to prep her that the fox cub is going to be super busy on December 24 (read: you’re going to have to hide him somewhere). Otherwise, she might panic if she sees her stuffed animal still snuggled under the covers with her come morning. And then on Christmas Day, the cub can reappear under the tree with all the presents, showing that he did his job well and helped Mr. C deliver presents to children everywhere.

Elf Pets: An Arctic Fox Tradition Book and Stuffed Animal
The Elf on the Shelf

The Elf on the Shelf is a beloved Christmas tradition, but the Arctic Fox might run a close second to that errant elf. After all, for parents, the Elf is a lot of work; I mean, what lazy parent hasn’t forgotten to move him at least one night leading up to Christmas? With the Arctic Fox, he only has to change locations once on the 24th, right before Santa shows up at your door.

And while their missions might be different, the Arctic Fox and Scout , the elf, still work together to make Christmas magical for kids everywhere. That’s what probably makes them besties — and makes the holidays even happier. Since he’s called an elf pet, maybe the Arctic Fox is really Scout's actual companion. Which would make sense, because both of them have important jobs that help St. Nick.

So if your child has any concerns or doubts about how Santa makes it all happen in one night, the Elf Pets: An Arctic Fox Tradition will assuage all of them — and hopefully buy you a few more precious (and priceless) years of your child believing in the hope and goodness of Santa Claus.