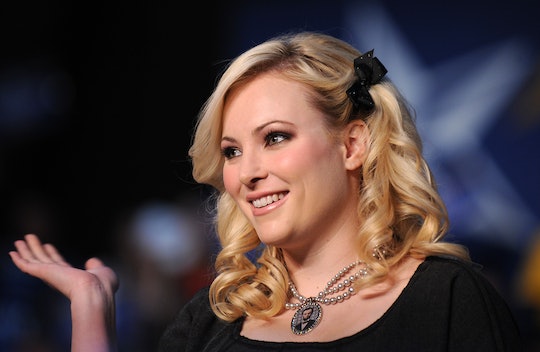 Social media was tailor-made for new moms. Case in point: When Meghan McCain asked a question about breastfeeding on Twitter that may have seemed a bit off the wall to some, she had responses from loads of other moms who have been there themselves. Pre-internet she would have had to sit around and wait to speak to her medical professional or ask her mom or something. Talk about the Dark Ages.

The View panelist and her husband, founder of The Federalist Ben Domenech, welcomed baby girl Liberty Sage on Sept. 28. As a first-time mom, it makes sense that McCain would have questions about parenthood and that she would reach out to her social media followers, even though she made it clear back in May after she shared news of her pregnancy that she planned to keep her child out of the "social media cesspool" as much as possible.

But, desperate times call for desperate measures. Especially when a new mom is worried about her nipples during breastfeeding. "I know there is a LOT going on in the world that is much more important but I’m in the throes of newborn land.... but I just wanted to know if your nipples can actually fall off from breast feeding?" McCain jokingly asked her followers in a tweet on Sunday.

McCain's concern about her sore nipples was met with empathy from moms who had been there before. "Oh wow. It’s been MANY years but the memory lingers," one mom commented. "They won’t, but they sure as hell feel like it. I kind of recall it was a 'latching on' issue. Try repositioning so she can get more nipple in her mouth. Wishing you comfort soon. It DOES get better."

Another mom shared a helpful tip on how to protect nipples from getting chafed by fabric. "Mine were super sore until all of a sudden they weren't," she wrote. "Lanolin is your friend. Also nipple guards - to keep the fabric of your clothing from rubbing against your raw nips."

Best of all, a Labor and Delivery nurse offered McCain the definitive answer she might have been looking for. "As a L&D nurse - no. But darned if it doesn't feel that way, sometimes!! Lanolin cream before and after feeding and before showering. Warm compress before feeding, cold after. Ibuprofen as needed. Congrats, momma!"

The Centers for Disease Control and Prevention (CDC) notes that nipple pain should recede once babies are well-latched, so that's good news for McCain and plenty of new moms out there likely struggling through the same kind of pain. But what's even better than a line or two from a government agency about your nipples? Having a whole host of moms on social media who have been there and are ready to share their own nipple stories. The internet was made for such a moment.