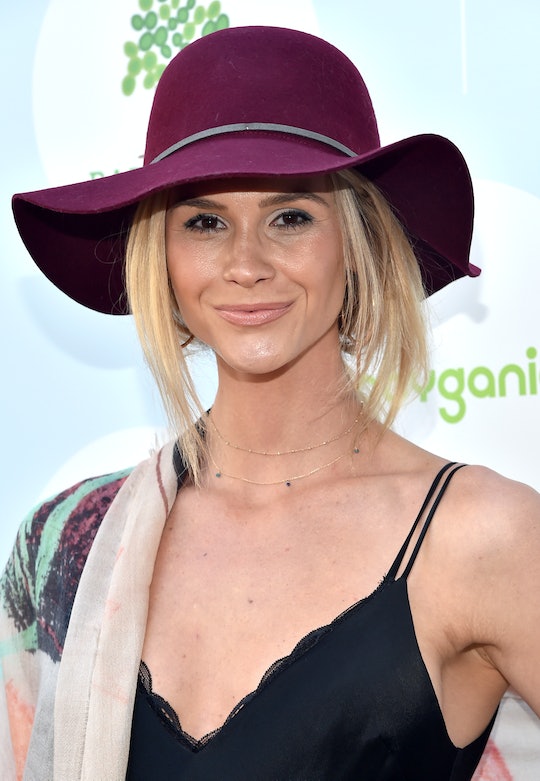 As a parent, it can definitely be concerning when it feels like your baby may not be meeting their milestones on schedule, and though it's true that all babies develop a bit differently, it's only natural to want to ensure you're doing the best that you can for them. So when former Real Housewives of Orange County star Meghan King Edmonds felt something was off with her 7-month-old son's eyesight, she sought help right away. In a recent Instagram post, Meghan King Edmonds said a chiropractor helped her baby's vision using an alternative therapy known as craniosacral therapy, according to People, and she's even called the results a "miracle."

However, as heartwarming as it is to hear that Edmonds' son is doing so well, it's not exactly clear if the treatment is something parents should consider seeking out for their own children without first getting an expert medical opinion to assess the issue.

Though viewers first got to know Edmonds on reality TV, these days she is a busy mom of three — in addition to raising her 2-year-old daughter, Aspen, Edmonds also gave birth to twin boys, Hayes and Hart, in June. In a recent Instagram Story, she revealed that she'd become concerned about Hart's vision after she'd noticed he "wasn't meeting certain milestones."

After consulting with her pediatrician and being referred to a pediatric ophthalmologist, Edmonds also explained that she consulted with her chiropractor, Dr. Mackenzie McNamara, who suggested she may want to consider giving craniosacral therapy a try.

In a series of videos shared both on her own account and reposted as a testimonial on her chiropractor's Instagram page, Edmonds discussed her experience, and explained that she'd opted to try craniosacral therapy (CST) — a type of noninvasive bodywork therapy using "gentle pressure on the head, neck, and back" to relieve compression, according to Healthline — after her chiropractor suggested it may help "loosen the muscles that were making [Hart's] eyes cross-eyed, and making it hard for him to see up close"

Though McNamara did not immediately return Romper's request for comment about the therapy, it's clear that Edmonds was impressed by the result. As she said on Instagram: "You guys, I'm telling you, he went twice. He became a new baby, the pediatric opthalmologist couldn't believe it ... He met all of his milestones within a week, literally seven days. It was astounding."

As enthusiastic as Edmonds' endorsement is, it's worth noting that the therapy isn't without some controversy. For one, there doesn't appear to be much scientific evidence to back the treatment. A 2012 review of randomized clinical trials by the University of York found, for example, that there was "insufficient evidence to support any specific therapeutic effect of craniosacral therapy." Meanwhile, in a 2017 report, the American Academy of Pediatrics noted there's a lack of "high-quality evidence" for chiropractic and osteopathic body-based practices, particularly regarding infants and children.

In her Instagram testimonial, Edmonds herself acknowledged that not everyone is on board with the notion of chiropractic care, though it's clear she feels it worked for her son.

Overall, the fact that CST is a gentle procedure likely at least means that, even if it doesn't specifically offer benefit, it probably won't cause harm. However, before deciding either way, it's definitely best for parents to consult their children's doctors for an expert medical opinion.

Discussions about CST aside though, Edmonds' video also raises some questions about infant vision issues in general. While it's definitely important to be aware of possible problems or complications that can arise with a child's vision, it's not entirely clear whether it's necessary for parents to worry if it seems their babies may not be able to see up close.

For one, it sounds like it's not actually all that unusual for babies to have some vision trouble. According to the American Association for Pediatric Ophthalmology and Strabismus, far-sightedness (aka hyperopia) affects "most children" early on in life, and that in most cases, no treatment is actually needed, unless there are significant additional complications like "crossing of the eyes, blurred vision, or discomfort" — symptoms which would certainly warrant further discussion with a pediatrician or vision care professional.

Although it's amazing that Edmonds was able to put her concerns about her son's eyesight at ease thanks to her chiropractor, it also seems worth noting that her own experience doesn't necessarily mean other concerned parents should follow suit without seeking an expert medical opinion first.

More Like This
A Parent’s Guide To Stomach Pain In Kids
Does The FDA's Plan To Limit Lead In Baby Food Go Far Enough?
Even If Your Baby Sleeps Better in Your Bed, It’s Still Not Recommended
Why Does My Newborn Shake Sometimes? A Pediatrician Explains
What Parents Are Talking About — Delivered Straight To Your Inbox