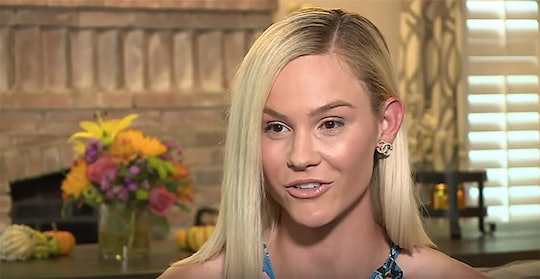 Shortly after Meghan King Edmonds revealed that her 1-year-old son, Hart, suffered brain damage while in utero, she embarked on a journey to find the best treatment for his recovery. And now one month later, Meghan King Edmonds is sharing an update on her son's treatment, providing heartwarming insight into her little guy's recovery.

In case you missed it, Hart, who was born in June 2018 alongside twin brother Hayes, was diagnosed with Periventricular Leukomalacia earlier this summer, according to a blog post Edmonds wrote in July. This condition amounts to irreversible brain damage, which explains why Hart struggles with rigid muscles, stiffness in joints, weakness in his lower back and difficulty with mobility, as Edmonds outlined in her blog.

The former Real Housewives of Orange County star elaborated on these issues in her blog, writing, “The nurses struggled to straighten his legs to measure his length."

Edmonds, who is also mom to 2-year-old Aspen, has tried various treatments for Hart, including oxygen therapy, according to Us Weekly. But now Edmonds is back in her old stomping grounds of Southern California to get additional treatment for Hart, revealing on Instagram that the two will be in the area for a total of three weeks. Considering Hart is at risk for Cerebral Palsy as a result of the brain damage, it's understandable why Edmonds wants to address this issue ASAP while her son's brain is still developing.

Hart's therapy will take place at the Napa Center in Los Angeles, with Edmonds noting on Instagram, "I can't believe it, but this is Hart's first time ever [in] California." And shortly after the duo landed in SoCal, Edmonds shared an update about Hart's progress.

“Can’t wait to get those stiff joints a little intensive physical therapy while his brain is still so young and plastic and able to form new pathways so he can walk ‘typically,'" she wrote on her Instagram Stories. Edmonds also shared a photo of Hart wearing shoes at the facility, captioning the shot: "He's so proud to wear shoes!" Aww.

Not only are Edmonds' updates heartwarming (what's sweeter than watching a young child flourish thanks to his supportive mama?) but I got to give the mom props for the strength she has displayed throughout these past few months, sharing with fans she'll do everything she can to help Hart succeed.

" ... I do not see his diagnosis as anything but a gift: we were chosen to take on this special person," she wrote in her blog. " I truly feel as if we’ve doubled down and won the underdog hand. Truly....This doesn’t mean his diagnosis isn’t a challenge… or a little bit sad, or that I don’t feel a little bit guilty. Because yes – just yes – to all of those things."

Although Edmonds has faced her fair share of life challenges in the past few years, including some marriage trouble, her response to Hart's diagnosis shows she's a very determined fighter. And she is doing everything she can to give her son the best future, which is admirable on all fronts.

Of course, I'll root for Edmonds and her baby boy during these next few weeks. You've got this, Hart!

More Like This
Can You Burp A Baby Too Hard? A Pediatrician Shares Tips For Gassy Tummies
Is It Good For Babies To Be Exposed To Germs? It’s Complicated
41 Strong & Sweet Baby Boy Names That Start With “K”
When It’s Safe To Bring Your Newborn To A Restaurant, According To A Pediatrician