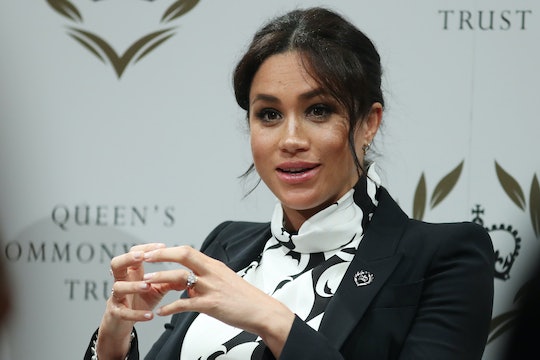 There isn't a single day that has gone by in the past several months without seeing Meghan Markle in the news. And as someone who checks the news on the regular I can tell you there's a whole lot of bad mixed in with the good. Whether it's gossip about her family, her past, her potential relationship with her sister-in-law Kate Middleton or the rest of the royal family, there's constant speculation. Which has changed her perspective, it seems. On Friday Meghan Markle admitted she avoids social media, and her reasoning is terribly sad but totally understandable.

During a panel discussion at King's College for International Women's Day on Friday, Markle was asked whether or not she checks Twitter very often. I don't think anyone would blame her for being a tiny bit curious about what is being said online. She was the most Googled person on earth of 2018, after all, and I have to tell you if that was me I might be curious about what people were saying. Apparently the Duchess of Sussex has a bit more self control than that. As she explained to the panel (which was being moderated by Anne McElvoy, the editor for The Economist), as per People; "My personal decision is to not to feed into negativity and be more cause-driven, action-based."

Markle went on to explain:

For me it’s a tricky one, because I’m not part of any of that. I don’t look at it. Sorry, no. For me that is my personal preference. But I do read The Economist.

This is a pretty different world from the one Meghan Markle was living in just a few years ago. She was an actress working on the series Suits and living in Toronto, Canada. She also had her own lifestyle site, The Tig, her own Instagram, her own Twitter account. As soon as she and Prince Harry were engaged, however, she ended all of that, as per The Independent. By January she had deleted all of her social media accounts. At the time I admit I found it a bit archaic. But now, when I see the constant feed of gossip about Markle online, I think perhaps this was a good thing.

As Markle explained to the panel, as per Vulture, now she prefers to focus her attention on "journalism that’s really covering things that are going to make an impact, which we talked about backstage. We were talking about Tanzania and the article The Economist just did. Things like that, that are really talking about how the role of women is really shifting and changing. That’s key. Focus your energy there and not on the stuff that is perhaps muddling you.”

Meghan Markle and Prince Harry are expecting their first baby together in the coming weeks. They're moving into a new home together as well. They're trying to figure out their world as a couple, and honestly I don't blame Meghan Markle for wanting to avoid anything that would take away from that.

Besides, it's not like she had to give up Netflix... that would be a tragedy.

More Like This
Meghan Markle Proves Once Again She's Totally Going To Be A Snack Mom
You’ve Probably Been Pronouncing “Lilibet” All Wrong
Meghan Markle Calls On Men "To Be Vocal" In The Aftermath Of Roe v. Wade Ending
Catherine Reitman Calls It Like She Sees It: “Being A Working Mother Is Impossible”