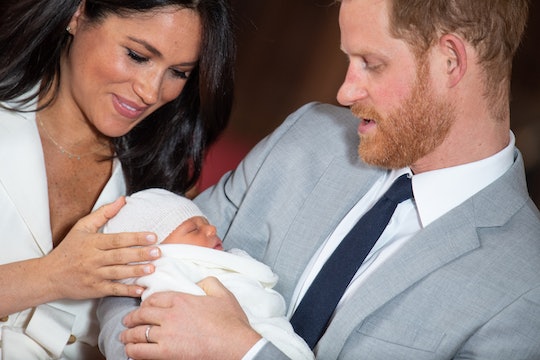 There are certain milestones each parent celebrates that feel especially significant. Certain moments that might help you feel as though you've hit a new level of parenting, like the expert level. Meghan Markle might have only been a mom for a few months now, but it looks like she's already hit one milestone with her son that many parents will recognize as significant. As it turns out, Meghan Marle and her son, baby Archie, may have gotten some traveling practice in ahead of their upcoming family trip to Africa. And baby's first plane trip is a real whopper to take on, no matter who you might be.

The Duchess of Sussex just celebrated her 38th birthday on Aug. 4, and it sounds like her husband Prince Harry decided to honor it by whisking her and their baby boy away for a bit of a holiday. According to a new report from the Daily Mail, Prince Harry, Meghan Markle, and baby Archie reportedly flew to Ibiza, Spain for a six day getaway recently.

This would presumably mark baby Archie's first time on an airplane at just 3 months old, which might seem young until you've flown with a toddler and then 3 months old seems just about right. Because let's face it, at that age babies can be a bit more amenable to being carted around by their parents. Mostly on account of not being able to voice their protest, I suspect. Which is good news since the couple are planning a much bigger international trip in the coming months.

This time around, though, it sounds like the couple enjoyed a seriously relaxing stay on the sun-drenched island of Ibiza, as the Daily Mail reported. The Sussex family reportedly rented a private villa and spent their precious few days together soaking up a little privacy, according to The Sun. No word on how little Archie fared on his first big trip, but I like to think he loved his time alone with his busy parents. I also like to think a small practice trip like this will help Markle and Prince Harry prepare for their big family journey to Africa this fall.

The Duke and Duchess of Sussex announced their plans to visit Africa in the fall with their little boy in tow via Instagram, writing: "The Duke and Duchess of Sussex are excited to announce that they have been asked to carry out a tour to Southern Africa this autumn. The Foreign and Commonwealth Office have requested a visit to South Africa as well as The Duke carrying out visits to Malawi and Angola. His Royal Highness will also do a short working visit to Botswana en route to the other countries."

The announcement concluded, "This will be their first official tour as a family!"

By the time they head out for their official visit, Archie will be around 6 months old, which means he will be one of the youngest royals to accompany his parents on a tour overseas, as noted by Harper's Bazaar. Prince George, Prince Harry's 6-year-old nephew, was 8 months old when his parents Prince William and Kate Middleton took him on a tour of Australia and New Zealand in 2014, as Vanity Fair reported. And he seemed to do just fine.

Still, I don't blame Archie's parents decision to reportedly take him on a much shorter visit to Spain ahead of time as a little practice. The flights from London to Ibiza tend to run around the two and a half hour mark, much shorter than the flights to Africa obviously.

Meghan Markle and Prince Harry are clearly people who want to travel the world as philanthropists and forces for change, but they are also parents. Good on them for getting baby Archie accustomed to his jet-setting lifestyle at a young age. This way he might be good with it when he hits those terrible twos.