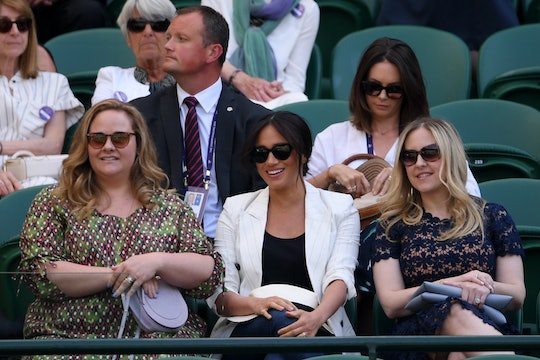 Meghan Markle is a woman living between two worlds. She became a member of the British royal family when she married Prince Harry last May, which is pretty much the most British thing you can be apart from like a crumpet or something. But she was also born in California and worked for years as an actress before becoming a duchess. So what's an American member of the royal family supposed to do when Independence Day rolls around and there's not a barbecue in sight? Well Meghan Markle celebrated July 4th by watching a fellow American play tennis, and since that American also happens to be a friend it seems like a pretty great way to spend the day. Although I hope she got a hot dog in there somewhere too.

The Duchess of Sussex has been keeping her public appearances to a minimum ever since welcoming her first child, son Archie Harrison Mountbatten-Windsor, with husband Prince Harry on May 6. For the most part she seems to be nesting nicely with her baby boy at the couple's new home, Frogmore Cottage on the grounds of Windsor Castle. But every once in a while a girl has to step out and enjoy a little adult time. Which is exactly what Markle did on Thursday when she arrived at Wimbledon to watch her friend, tennis queen Serena Williams, defeat Slovenia's Kaja Juvan in the second round of the competition.

Now as much fun as it would be to sit on the sidelines and watch Serena Williams play tennis, it's obviously way more fun if you're with your friends. Fortunately for Markle, two of her friends from her Northwestern University days were on hand to enjoy the match with her, as per People, Lindsey Roth and Genevieve Hills. Of course now that Markle's friends have arrived to hang out so close to her son Archie's christening on Saturday, speculation has begun that the women could be among the royal baby's possible godparents. Fans won't find out, however, since the couple made a public announcement on Wednesday that they intend to keep the identity of Archie's godparents private.

Last year Markle was also on hand to cheer on Williams at Wimbledon, but she was with a member of her new family at the time, her sister-in-law Kate Middleton. This was back when fans were allowed to like two strong women at the same time, before the ridiculous feud rumors. It was a glorious golden age of feminism.

Markle has actually managed to enjoy a bit of an American week across the pond, beginning with a surprise visit to the Boston Red Sox and the New York Yankees, who were in the U.K. to play their first ever game across the pond. Both teams gifted Markle and Prince Harry with gear for Archie, and Markle looked ecstatic to be among her countrymen.

Presumably Meghan Markle is pretty happy with her new life as a member of the British monarchy. But still, every once in a while a girl needs to get back to her roots.

And if she can do it while cheering on Serena Williams at Wombledon? All the better.