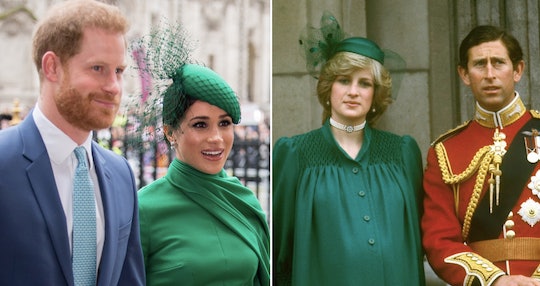 Commonwealth Day is a pretty big day in the United Kingdom for a lot of reasons. Not least of which is the outfits. The royal family dresses up and dresses out, pulling out all the stops, and this year, Meghan Markle channeled Princess Diana with a gorgeous green ensemble that looked a lot like one the late royal wore decades ago.

The Duchess of Sussex wore a stunning emerald green Emilia Wickstead cape dress, as Vogue reported, with a fascinator hat and mini bag. Despite the event's proximity to St. Patrick's Day, Markle wasn't looking to avoid getting pinched. Rather, the look appeared to be a tribute to her late mother-in-law, Princess Diana, who wore a very similar emerald green look of her own back in 1982, while pregnant with Prince William during the Trooping the Colour ceremony.

This isn't the first time Markle has taken a note out of Princess Diana's style book. She dresses like Prince Harry's mom now and then, borrowing Princess Diana's jewels for special occasions. For instance, she wore a sweet pair of butterfly earrings while in Australia following her pregnancy announcement that previously belonged to Princess Diana, as Town & Country reported. Considering the fact that Markle never got to meet Prince Harry's late mother, her tendency to style her outfits after Princess Diana is a great way to create a connection and keep her memory alive.

Prince Harry and Markle have been wrapping up their final official royal duties before heading back to Canada, where they plan to live a more independent and private life with their son Archie. And a touching tribute to Princess Diana is a wonderful note to leave on. Besides, does she look amazing in green or what?